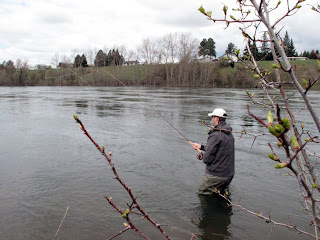 Welcome to my new mistress....the two hander. I cant wait for the return of ol' steelface to rock the spey and swing away. I might even put away my nymph stick for a while

Tom Larimer bombing way and teaching us up 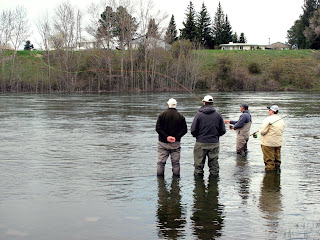 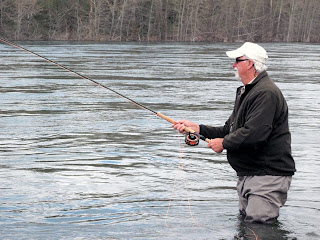 Oh this summer and fall's going to be fun
Posted by Millsy at 10:57 AM No comments: 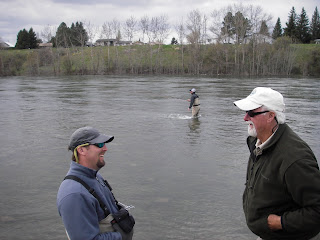 To river we went, armed with tools of the two hand trade. We had the pleasure of picking up pointers from the spey guru Tom Larimer of Hood River and owner Larimer Outfitters in a 4 hour casting clinic.

If you ever have a chance to work with this guy.....JUMP AT THE CHANCE. Wow is all I can say. I walked away today feeling I at least can cast somewhat correct to a steelhead with a two-hander. Now getting them to take, that's something there onto its own 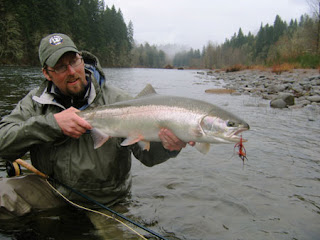 Thanks again Mr Larimer. Now will you tell my wife that a 7134 Z Spey is the right thing to go buy....Ahhhh preciated! 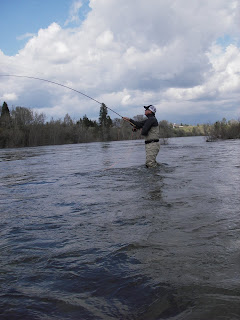 Sean from the Silver Bow, bombing away
Posted by Millsy at 9:02 PM 1 comment: 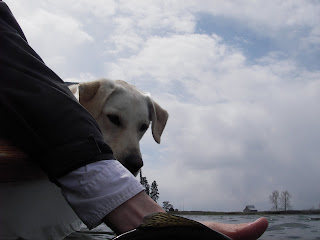 Out to Amber Lake today to fish and avoid the crowds elsewhere. April 25th....General Opener. General Opener = General craziness at most lowland lakes around the area.

I have come to the realization that Opening Day for fishing is a meaningless entity to me now. Growing up, I don't think Christmas morning and the jolly ol' elf himself could keep me away from celebrating Opening Day with the trifecta of powerbait, worms and marshmallows.

Dont get me wrong, Opening Day to a kiddo should be dangled out in front of him or her like the carrot it is. Marked on the calendar. Coolers packed the night before. Parents waking kids up before sunrise, so excited that breakfast is not an option. Nailing that first fish, surviving terrible spring weather, and coming home tired but happy as hell.....because Opening Day was here and now we can fish all spring and summer long

But now, its another day on the calendar. Why do I say this? Fishing lunacy has taken full hold of this soul. We fish all year long, through the cold, the sun and everything in between. Now the real opening days in our hearts are the special times of the year . Steelhead Season. Cutty streams coming into shape. Salmonflies. Fishing after work because there's enough light.

So here's to being on the lunatic fringe of fly fishing, because each day is Opening Day in our minds 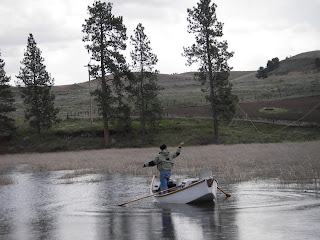 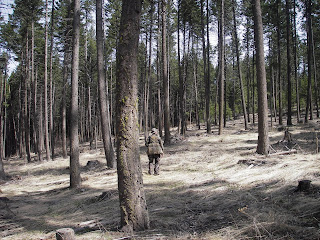 A few good shots from last weekend spent chasing Mr Tom. A few gobbles here, a few gobbles there, but this was the only turkey I saw. Meet Helen the Hen 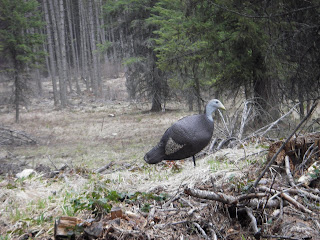 One thing that getting up at 3:45 am does afford you; a special view of a hell of a sunrise 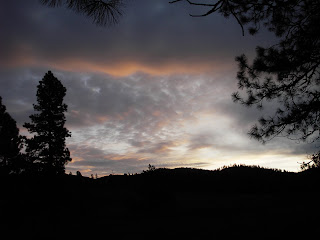 Posted by Millsy at 2:31 PM No comments: 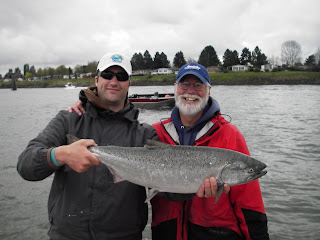 Back to where my family came from.....back to how I started fishing in the first place.

Portland is where my dad's family is from. Aside of Spokane, its the only other city in the world where I feel at home. Countless cousins, aunts, uncles and so on give it the air of home. Planned weeks in advance, the trip's purpose was 2 fold. See my cousin's new baby girl Harper and the rest of the Mills Clan....and by some coincidence, timed to the start of the spring Chinook run on the main stem Columbia. 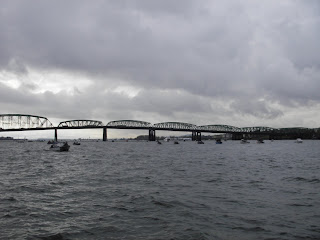 Fly gear is useless in this fishery. Boat after boat after boat were targeting "Springers" in their annual migration up the artery that drains the west. Forecasted as the third largest return on record and coupled with my uncle's full freezer from the previous weeks fishing, excited was an understatement

These fish too were on their journey home. 4-5 years at sea, dodging nets and sea lions, eventually through dam after dam. Hatchery or no, these fish are resilient. They are the Columbia's lifeblood. Harnessed by dams, used as a commercial route, so on and so on.....still the fish come back through this route...albeit augmented drastically by hatcheries. I cannot fathom the estimated 16 million salmonoids that once annually returned to the Columbia system. Mind boggling.

Trolling for these fish amongst the Portland/Vancouver boat mass is nuts. Hundreds of boats around you, yet there is a bit of a system everyone works under. Down the drift you go and once your done, around the side and back into the que to start again. 6 ounce weights to get to the bottom, cut plug herring to entice the strike.

Friday was a cold morning, but it didnt matter. This was my uncle Larry's show, aboard his Boston Whaler with OMR and armed with his secret herring potion. Success was coming 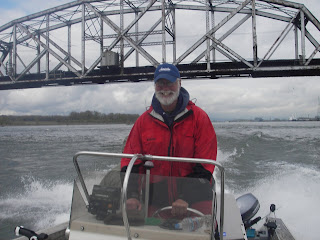 About 2 hours into the morning and involved in a classic Mills family bullshit session, I looked back to see my rod DOUBLED over in the rod holder. Into action we sprang, other lines up, motor into neutral; its time to battle

The first leap cleared the water surface a good foot and a half, much to our surprise and the 25 boats around us. Finally the fish took off and ran, only to jump 3 more times and tail walking on every one of them. Mind you this King was dragging a 6 ounce weight.

To the boat it came, jumping 2 more times within 5 feet of the deck. One big swoop with the net and the hatchery Chinook was dispatched. A few OMR-OMR vr2.0-Josh chest bumps and high fives later, you couldnt find 3 guys with bigger smiles on the whole Columbia. The best part, nobody had caught a fish around us for a long time. You could just feel the envy from the fleet

We arrived home and my cousin Cole, OMR ver2.0's son surprised the shit out of me with "hey get your shit together, we're going to the Blazers-Lakers game" No way, catch a King, get to heckle Kobe in the same day....greatness 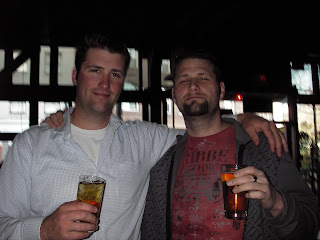 Look at these terrible seats..... 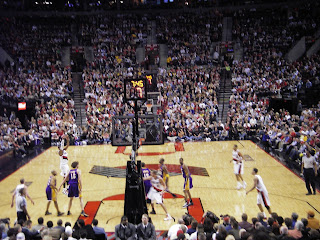 The rain stayed away for Saturday's fishing. The hot tip for the day was to make a run way down river to a place called Willow Bar to drop into a "hogline", drink beer, bullshit and wait for the fish to come to us. Through the middle of a slow day of fishing, you learn a lot. Great family stories you've heard 15 times mixed in with gems you've never heard. The fish that got away. Stories about your grandfather and the origins of our family in the Portland area. Crazy relatives, new additions, future plans, retirements going to shit, techniques on how to keep a happy wife while your addicted to fishing....

and then it happens out of nowhere. Steeeeeeee RIKE.

My dad's rod bucked like it was attached to a kicking mule. I jumped up, grabbed the rod and gave it to Old Man River. This fish ment business, taking run after run and fighting like any self respecting Springer. With 20 or so boats around watching us, I had the pleasure of netting that King for my dad. 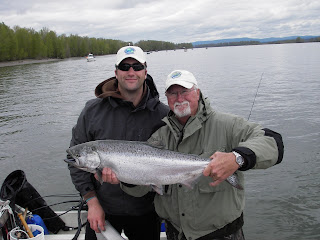 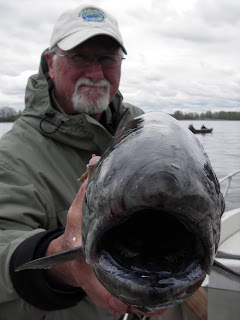 We later missed another boat rattling strike when the fish unbuttoned, but it was ok. We accomplished what we set out to do. Uncle Larry showed us the way like the expert guide he is, and we held up our end of the bargin by putting meat in the cooler.

Like the Salmon, coming home felt right
Posted by Millsy at 7:55 PM No comments: 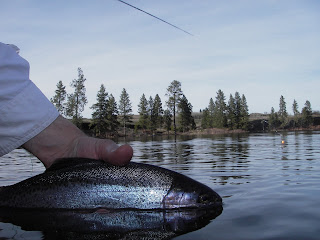 Its probably why I love to fish so much. Solving the ever evolving mystery of how to get the job done. From a place I have fished a hundred times to a brand new piece of water with untold mysteries lying underneath the surface, finding the key to hot fishing is just the shit.

OMR and I saddled up the drift boat and headed out to Amber Lake just outside of Cheney. We have fished this lake enough to where we usually plain do work.

Today, it was a mystery for 3/4 of the day. OMR hit up 2 bows early in the day, but that was it except for a minor battle I had before the trout came unbuttoned. The typical chronomid/bloodworm combo for early spring wasnt doing it at all.

Into search mode we went, up, down, left right. Finally, at 3pm, jackpot. 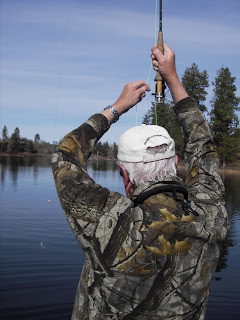 By chance, we found flat with tremendous midge action. Nymphal shucks everywhere on the water. Fish were boiling here and there, a sure sign of those cruising fish keying in on midge larvi as they ascended through the water column. Off goes the blood worm, on goes a black chronomid sans weight as the dropper and WHAA BAMMM....

Fish swirls, land the fly, slight strip BAMM.....on and on for the better part of an hour. From a day where nothing is going on, to that....well, hallelujah, those swirling fish gave us a present. A new key for a new situation. How many were caught? In typical fisherman fashion,
I will respond with .....................enough for a good day 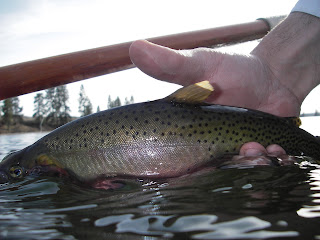