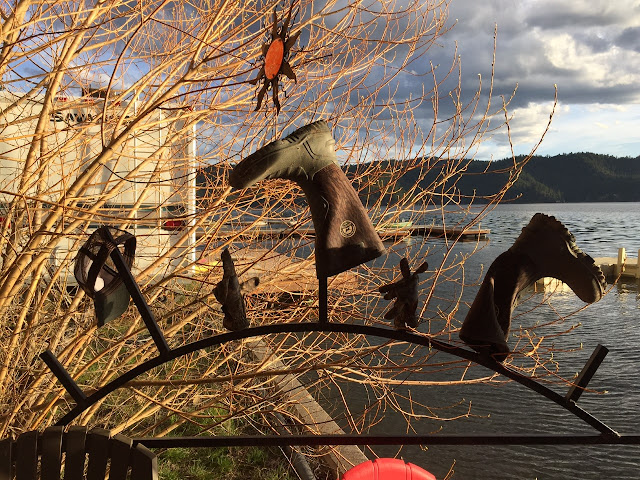 As we approached the property we had permission on, I noticed the telltale form of a gobbler in the corner of the field.

With OMR waiting in the truck, I began my stalk on the unsuspecting turkey

The field had not been hunted in the opening week because of the normal gently flowing creek that bisected the farmers field was a raging torrent.  Upon further inspection I found one way to cross it, shielded by a rise in the field so the turkey wouldn't event know I was there

A few hen calls and that baby should be rolling in on a string to meet it's end.  A perfect plan it was going to be

As I popped my head over the rise in the field, 10 whitetail deer which were unseen on the road busted me and ran right at the turkey.  As I'm watching this happen, I hear the truck's engine roar to life about 200 yards behind me.

"What in the hell is he doing" I think to myself as I stand up and begin to try and signal OMR that the hunt is over at that point.  He continues to back out of the old barnyard, to the pavement and then zooms away leaving me stranded frantically waving at him trying to figure out what in the hell he was doing.

Now I know my father would never leave me, but it was such a strange move.  In all the years we've traipsed about the woods, I've never seen him up and drive off unannounced and off plan.

Did the landowner about face and come yell at him with out me knowing?

Was he having some medical emergency?

Was he possessed by Sasquatch's alpha brainwaves, rendering him certifiably nuts?

Hell if I knew.

Dejected at the failed stalk and somewhat nervous about why he left,  I began the walk back to the road thinking he may have just repositioned up on the road.  Now I was about 100 yards downstream of my initial creek crossing and in some strange line of thinking I thought I could just beeline it for the road and not go back to where I had crossed.

I gingerly began walking into the flooded portion of the field, taking time to asses each step and make sure I was taking a safe route through the creek's path

Then it happened.  One step I was fine, next step I fell off a cliff into a rushing hole of 10 foot deep water.

The rush of full submersion in icy water is no joke. Clutching my gun, I grabbed the opposite shore and drug myself out of the channel that wasn't more than 6 feet wide.  As I stood up, there was OMR returning to the barnyard.  He watched the whole folly in realtime himself

"What in the hell were you doing"

"Why didnt you cross where you crossed earlier"

"When have you ever just DRIVEN OFF"

Dad and I often yell at each other like brothers.  In this case, it was nervous energy on both sides of our predicament coming out in a colorful vocal display of displeasure.

As I stripped off the drenched ice cold clothes, he explained to me he had just driven down the road a bit to get a better look at the field to see if the bird was coming in.

Oh, so it wasnt Sasquatch's fault....

Assessing the damages, I had a wet gun, drenched clothing and ego.

I always have extra clothing in my fishing bag.  Turkey hunting, nope.

Thus, I had the misfortune of riding home in a old pair of camo hunting bibs and nothing else

That is a hot look.

After the anger and confusion wore off 10 minutes down the road, I just started laughing.  Dad started smiled and then laughing as well.   There would be no turkey on this foray afield.  We got something better.

A story for life.
Posted by Millsy at 5:30 AM No comments: 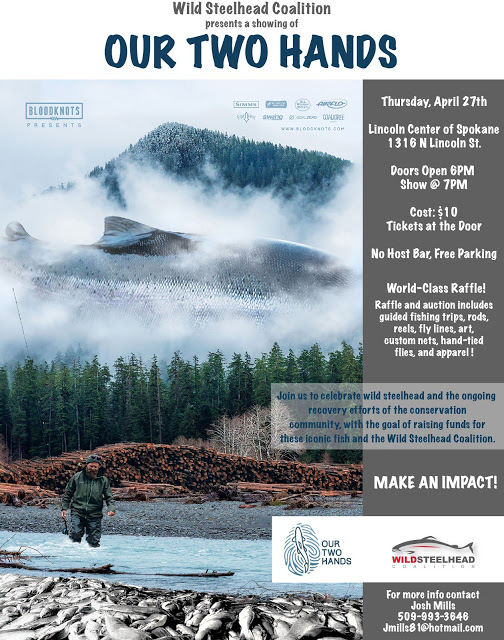 Next Thursday the doors will open at 6 to the Spokane premier of Our Two Hands from Bloodknots, and to say that I am excited is an understatement

The raffle and auction are set up to be the best we've ever had at our Spokane events.

And amazing artwork like this from local Spokane artist Marcell Scott 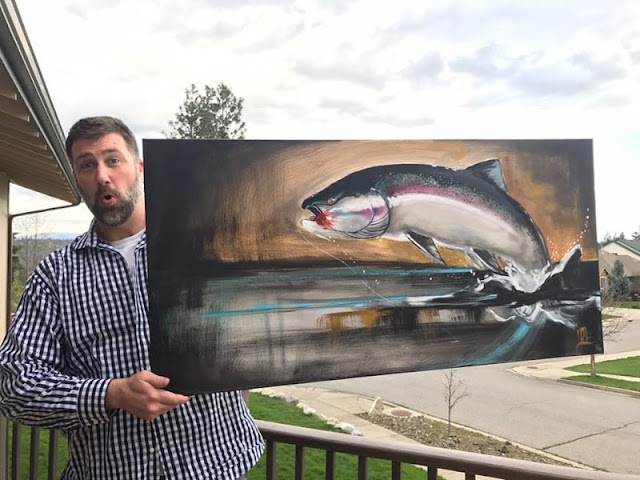 Here's more info on the venue, the Lincoln Center,  for directional purposes

So see you next Thursday, it's going to be quite the party with the end goal of raising a lot of money for The Wild Steelhead Coalition.

It might as well be a string of 4 letter words.

I have to hand it to the fish managers in Washington State.  They myriad of conflicts and stakeholders make their job next to near impossible, but the continued practice of MSY is cray zeeee.

Join the fight and sign the petition to bring them back at Steelhead Country today
Posted by Millsy at 6:04 AM No comments:

A Weekend of Conservation 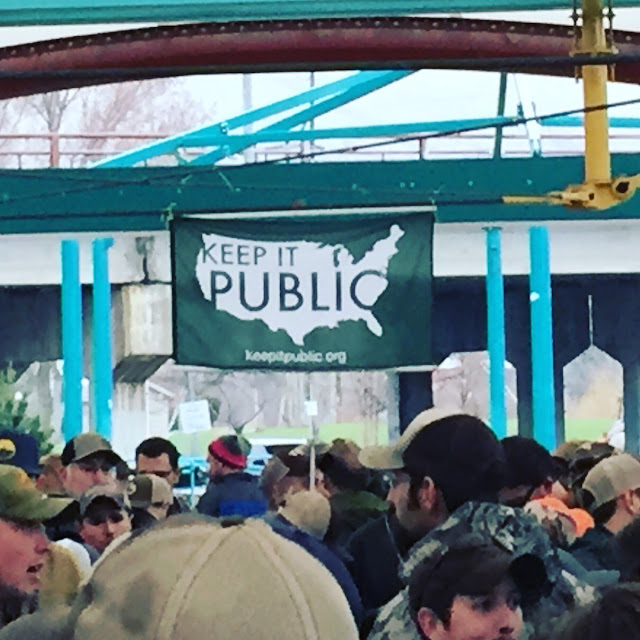 Nothing like meeting up with 1000 plus rabid public land advocates to get you fired up about keeping public lands in public hands.

The 2017 Backcountry Hunters and Anglers Rendezvous is in the books and what a weekend it was.  Fast track networking, seminars, fundraising  for 3 days brought the noise.

I was given the opportunity to be a featured speaker for BHA Storytellers event at the Wilma Theater.

I can tell you there's nothing like hitting the stage with 800 or so folks looking back at you.  The nerves go next level when you realize you're about the only one without a TV show of your own. 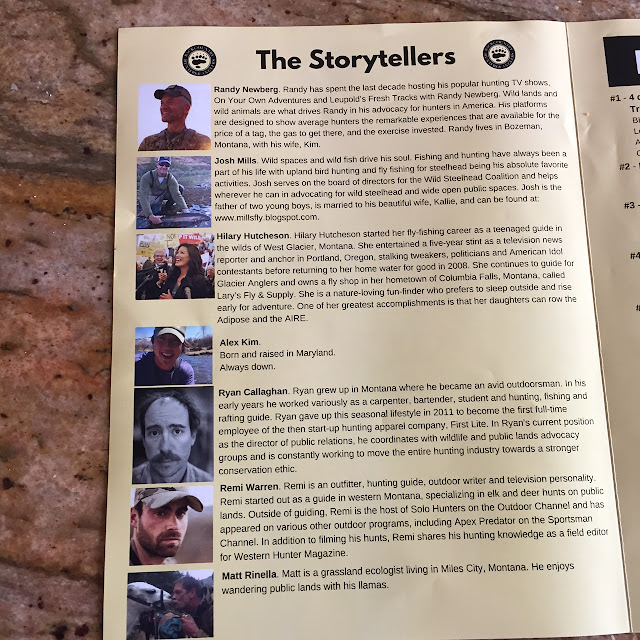 What a weekend.  What a night.  What an organization to be a part of.

You know that feeling when you're in the right place, with the right people at the right time.  It was this past Saturday night.  The stories were hilarious, the mood was electric and the community was awesome.

Cant wait for Rendezvous 2018, slated to be in Boise, Idaho.

Get more info, join the coalition of supporting businesses and organizationas and help us bring them back at the Steelhead Country web site
Posted by Millsy at 7:05 AM No comments:

Free Spikes Or Soles From Korkers... 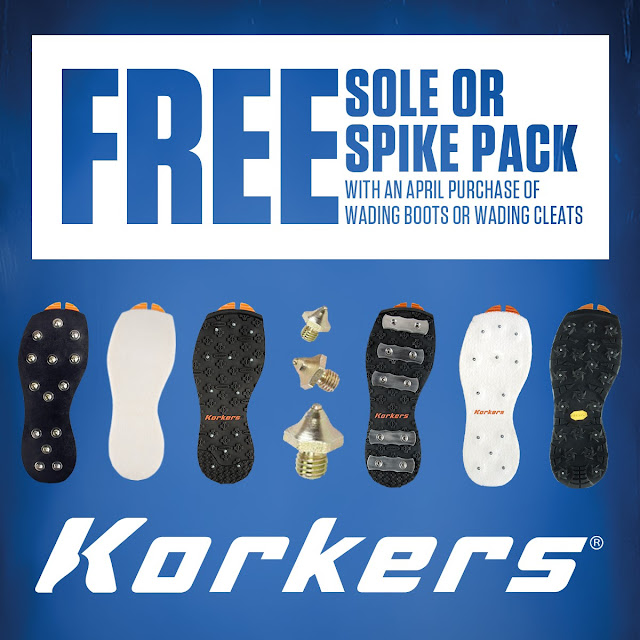 Pick up a pair of wading boots or wading cleats from any Korkers retailer and you'll receive a free sole or spike pack.

I have been exceedingly impressed with Korker's Darkhorse Boot.  Time and time again, my 6'8 and 280 pound frame puts outdoor gear to the test and this boot hasnt shown any signs of wear yet Additionally the Darkhorse is the most comfortable out of the box boot I've ever fished in

Get more details about Korkers April limited time offer HERE.
Posted by Millsy at 8:14 AM 1 comment: