The Pitfalls Of Asking For Permission... 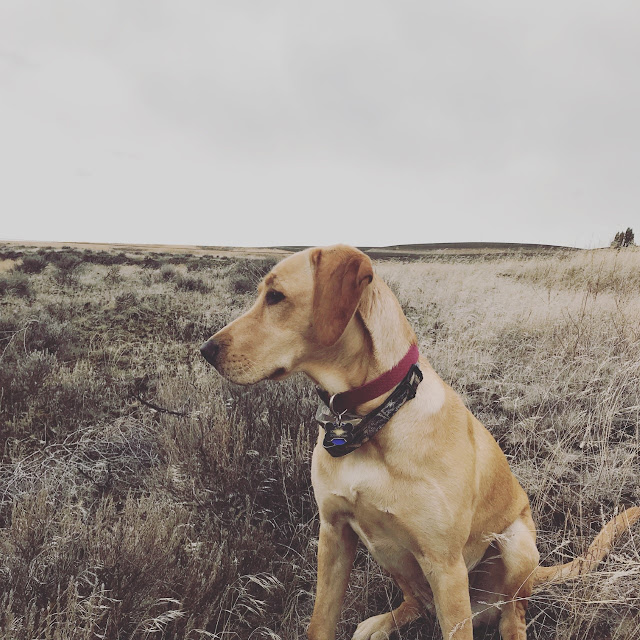 Finding permission on new ground to hunt on is just pure math.

Knock on enough doors, and your bound to gain some access.   Public ground is amazing, but you  should thank your lucky stars when a landowner is allows you on their ground to hunt.

The other places seem to fall into about 3 categories.  Sometimes you're told no as they prefer to not let folks hunt on their land (insert here story of other yahoo's who've ruined it for you and other hunters forever after).  Next, you often cant find the owner or they're not hom.   Lastly ...I think landowners like to send you on wild goose chases because "they're not sure who owns that ground, why don't you go talk to the Johnson's over that hill to the west."

The Johnson family don't own that land.  They never do.  The first guy owns it....

Then sometimes you just have weird stuff go down on the farmer's doorstep.  Case in point, this past Sunday I had a few hours to go seek out some new pheasant spots near Spokane.   OnX can only tell you so much as you really need to see what the cover is like.  What food is near it?   Does it have water?  Is the cover thick enough?  Where are the hidey holes?    All the questions you need to answer to say that it's likely holding ground for wild ditch parrots.

Rolling along on some out of the way Palouse road,  I found what I was looking for.  Quarter mile later, two houses next to each other on a hill.  Target acquired.

With nobody home on the first door knock, I shifted to house number two.  It seems that these small cluster of homes s are typically all family.  Parents on one side,  son literally next door and so on.  Fingers crossed that I was rolling up the driveway to the parents house and hopefully with some sweet talking and thank yous' I'd be hunting that awesome new draw in no time at all!

I  noticed the "BEWARE OF DOG" yard sign but I blew it off as but a smokescreen to my goal.   The 35 lb white border collie came barreling towards me from the back of the yard barking it's head off.  and all I could say was "it's ok, it's ok"   For some reason,  that calmed the dog and myself down, ever so slightly.

Ring the doorbell and step back, smile and appear as non threatening as possible....

Shuffling and clanging at the door, but finally it opens......

As fast as I've ever seen a dog move it was on me, trying to bite the crap out of my leg.  I stepped back and it's teeth thankfully hit nothing but my boot (thanks Danner!)  At the same moment, the homeowner rained fire down on this disobedient dog with the set of hiking boots in his hand, striking it on the tail end causing the nasty mutt to retreat.

"Get to your car, didn't you see the beware of dog sign?"

"Ahhh, sorry sir...was just looking to be respectful and ask permission to hu...."

"You should probably go ask the Johnsons....they're just over the hill" 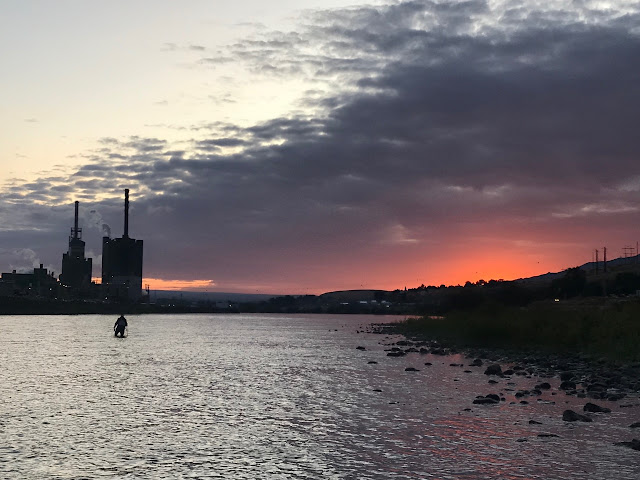 We were mid float when our cell phones blew up with what we knew was coming.

The mighty Clearwater River in Idaho was to close to steelhead fishing as of October 1st.    It was almost like fishing through a funeral or a wake.  I lost my ambition to really give it my all when Idaho actualized what we all really knew what was happening.....

The steelhead fishery on the Clearwater was and is in a world of hurt.

Then a curious bit of news came out of the closure.  The season for Chinook and Coho would remain open through October 13th.

All anglers on the float collectively rolled their eyes at this detail.  Does Idaho really give a care about the steelhead fishery, or was the closure just optics/political theatre and leaving the Coho fishery open to placate angler opportunity.

My friend Billy said what we were all thinking, alas in jest. 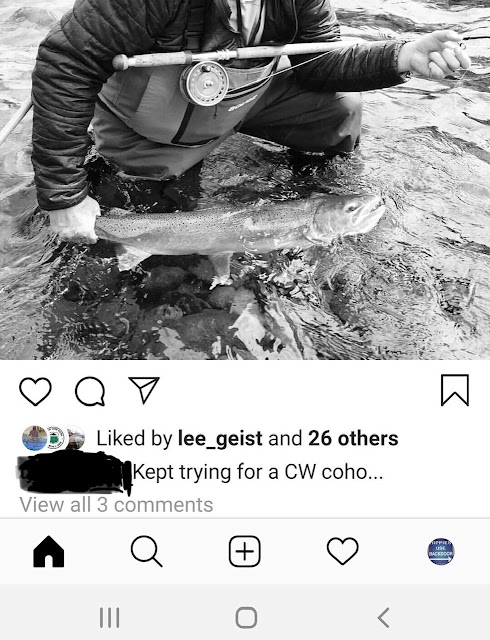 And then this happens.

First, if you have a stock of fish so imperiled that they feel the need to close it's season, then there's no reason that the Coho or Chinook fishery should have stayed open.  Period, end of story.  The short-sighted nature of that decision is without a doubt the craziest part of this whole story, aside of the fact that the closure centered on not having enough hatchery fish returning to make hatchery escapement.  Bi-catch of steelhead was and by the picture above is a certainty.

When another angler alerted me to this picture on Instagram, I really had to calm down before I reacted.  I thought long and hard about what was going on here.

Floating lines, spey rods and hairwings.   If you can bite through my sarcasm, seems like a totally traditional Clearwater Coho set up.

Second if you really believe they're going for Coho....then why post the picture of an accidental bi-catch for everyone to see?

Because it wasn't an accident to catch that fish.   What I really believe is that this angler, along with others I've heard of fishing for "coho" are just using the opening to continue thumbing their collective noses at the majority of the angling public who are following the rules.

And that pisses me off.

These anglers are really in the wrong here.  And deep down, I bet they know it themselves too.

It's a bad look, all around.