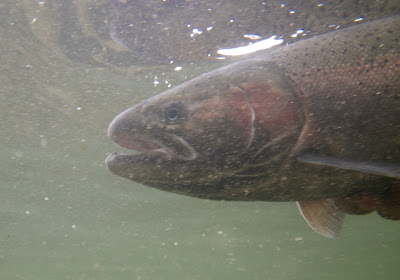 If you are Blake, you won my contest.  I have flies for you that help you catch these things.

Please respond promptly.  Then go fish them, report back with your success.

email me at jmills81 at hotmail dot com

After the TNT, The Water Flows...

Think about this, it's the first time in damn near 100 years that the White Salmon runs free and soon in the future, to it's connection with the Columbia.

Give the fish and nature a chance, and it will rebound.  I am terribly excited to be a part of a generation to have a front seat to watch it come back.

Godspeed!
Posted by Millsy at 5:44 PM No comments: 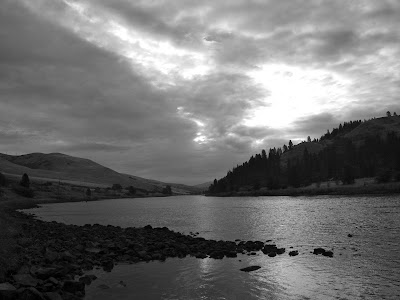 Tell me where this sexy h20 is, within a mile or so, and I will send you a couple of my Hobo Spey Flies as a reward.  Good luck.

Ties broken by order of submission.  Winner picked this Friday.
Posted by Millsy at 9:18 PM 6 comments:

Hey, What's Peaking Out of Your Bird Vest... 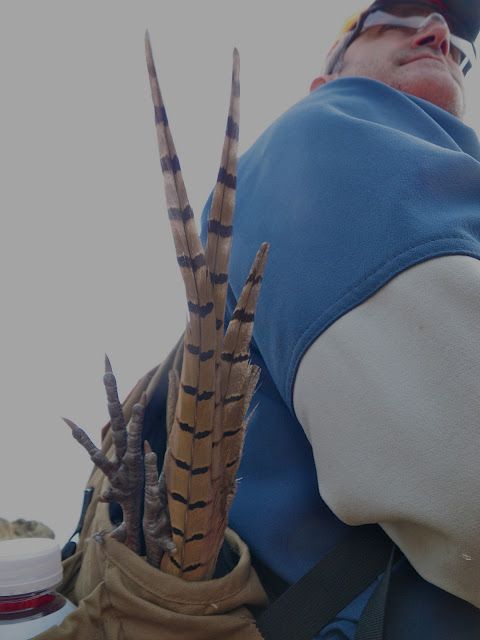 I believe they call it "Dinner"

The 2011 pheasant opener is in the books.  The dogs and their owners are tired, but very, very happy.
Posted by Millsy at 9:17 PM No comments:

Tis The Night Before... 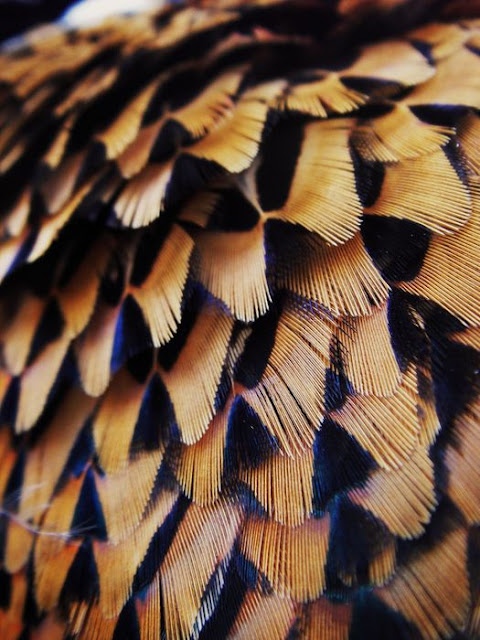 Murph dog about lost her gourd when I started assembling the gear.  I might or might not have washed my brush pants from last year's last trip and the scent blast of dried pheasant blood must have been a sensory overload for her.

Tis the night before pheasant season, and all of us in this house are just slightly excited.  Fingers are crossed for a decent second hatch of wild roosters as the first hatch was basically lost in our spring rain barrage that just kept coming.

Tomorrow is a day I haven't missed since I was 11 years old.  It is a part of me as much as any part of my life.  Some first days are over quickly, other are an excursion in perseverance.  Either way, it's a day that I look forward to all year.

It's also a day that bring the fair weather hunters out to crowd the grounds.  Through time and developed relationships, we are afforded the opportunity to hunt territory that others do not.   Even that said, the season is long and with good numbers, we will enjoy the chase deep into winter when the fair weather gunners are sitting in front of a fire.

So tomorrow, may the dogs work close, may the birds hold tight and good luck to the trigger fingers that culminate the activities of opening day of pheasant season.
Posted by Millsy at 7:37 PM No comments: 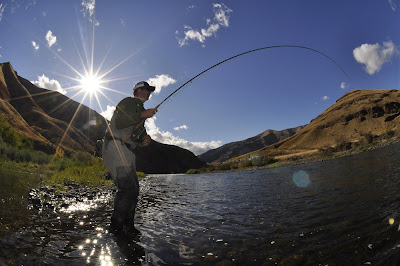 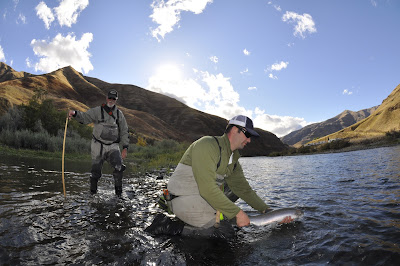 Look what I found... 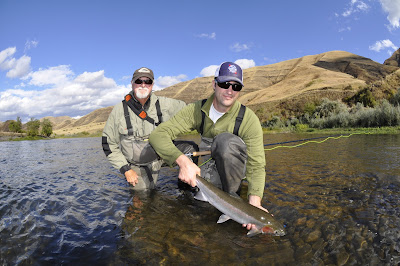 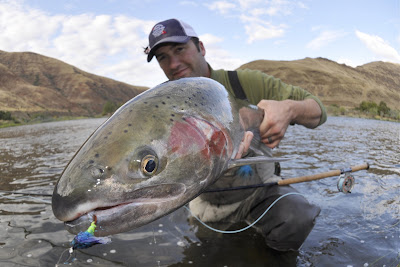 Whats in your beak... 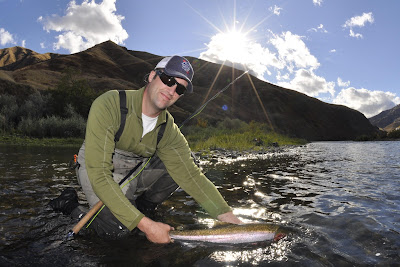 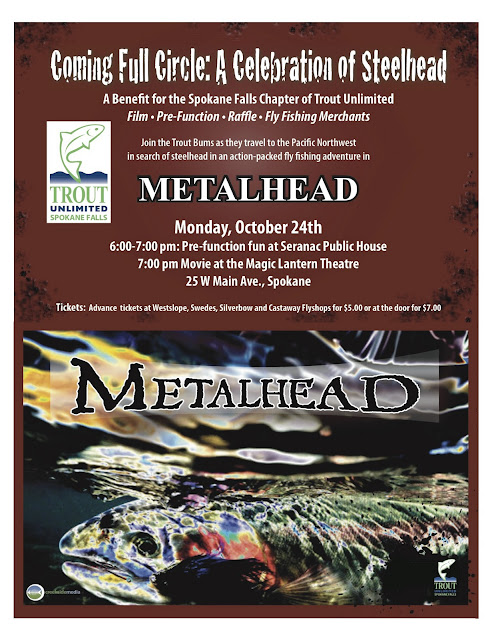 See you next Monday.  You best be there foo's..

I've seen Metalhead about 17 times and I dont care, it's still cool as hell.
Posted by Millsy at 8:23 PM No comments:

So I Ran Into Turd Furgeson... 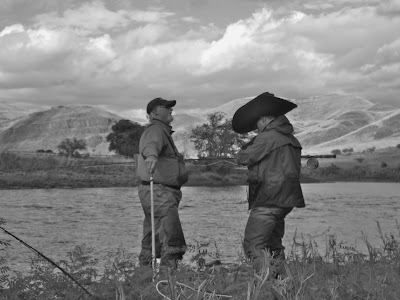 He dispensed wisdom on a gravel bar with OMR. 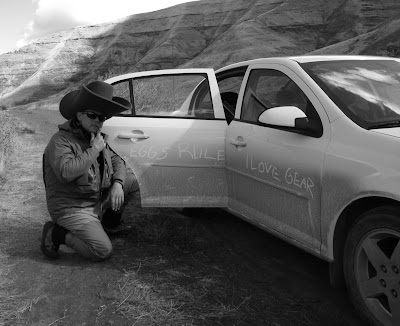 He let me know his opinions on gear and tactics... 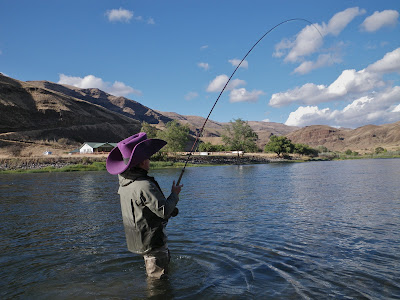 And the dude drops lasers and catches fish. Way to go Turd!

Reversal of Opinion, I Do Believe... 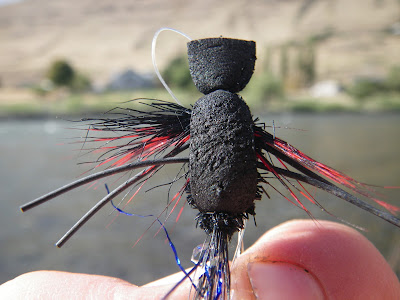 I have changed my opinion, wholeheartedly.  I doth stand corrected.

With an hour of daylight left yesterday, I threw out caution, clipped off my wet fly and went skating.  That hour  was a glimpse into true Steelhead Nirvana.

Our group had already had a great day with a consistent bite and fish landed.  OMR landed a massive hatchery hen on the Snake and the end of the day put us at the mouth of the home river.

The light began to flatten out and with a Skopper attached,  I saw my first actual skated dry take by a steelhead.  I promptly trout set it out of it's mouth.

Wow, it actually happened.  Couldn't believe it.   Ok, back at it.

Two casts later, a massive slashing rise and we were connected.

I said that phrase 5 more times in that hour and landed two fish.  This is the type of stuff that makes Steelhead nuts like me a bit weak in the knees.

So back to that picture.  That's what happens when 7 different fish try to destroy a skater. 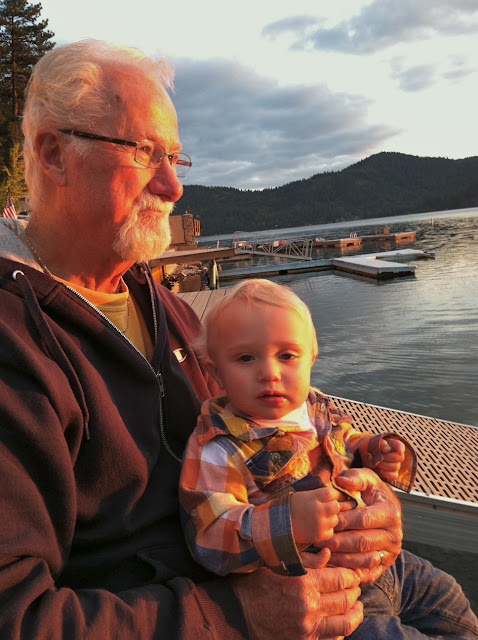 OMR is under strict orders that he has to still be fishing when it comes time to tail Carson's first Steelhead.

I have a good feeling that it will happen just that way.
Posted by Millsy at 8:24 PM No comments:


Off the Grid Fly Fishing Trailer from RA Beattie on Vimeo.


Looks like RA Beattie and Joey MaComber have another winner.

Just show me where to insert my debit card to order.
Posted by Millsy at 7:33 AM No comments: 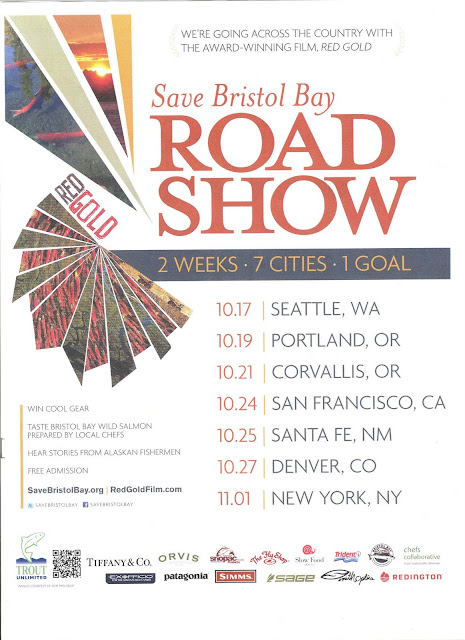 Alaska Natives, commercial fishermen, sportsmen and seafood processors are heading south on the Save Bristol Bay Road Show to raise awareness and build support for protecting Bristol Bay Alaska, which is threatened by the proposed Pebble gold and copper mine.

The mine, potentially three times as large as the largest current mine in North America,  would threaten the headwaters of Bristol Bay, putting thousands of fishing  jobs at risk, along with a Native way of life that has existed for centuries. The real gold in Bristol Bay is the world’s largest sockeye salmon fishery, a sustainable resource that returns year after year.

In six cities, commercial fishermen, Alaska Natives, sportsmen and seafood processors will highlight the economic risks posed by the mine. The Road Show will also feature a screening of the award-winning documentary, “Red Gold,” delicious Bristol Bay sockeye prepared by local chefs, and locally produced beers.

Melanie Brown, an Alaska Native and commercial fisherwoman, and Ben Blakey, of family-run seafood company, Snopac Products, will travel to all of the cities as featured speakers, sharing the importance of the region as an economic engine, source of jobs, and resource for food.

In each city, the program will also feature sportsmen, fishing guides or commercial fishermen, whose livelihoods depend on the clean waters and sustainable fish runs of Bristol Bay. More than 12,000 jobs depend on the commercial salmon fishery in Bristol Bay, along with more than 1,000 jobs related to sport fishing and countless other businesses.

If you're in any of these cities, you need to go to this event.  Mark it NOW on your calendar.

Make your stand now for Bristol Bay.
Posted by Millsy at 8:31 PM 1 comment:

Labels: Fuck the Pebble, No fucking Pebble Mine, Save Bristol Bay, Trout Unlimited

I Don't Believe in Skating... My return to my home steelhead river had me skating various patterns through the glassy tail-outs of every run we came to.  My eyes focused so hard on the swing and skitter,  testing my hypothesis that I could pull a jedi mind trick on a resting steelhead to have it rocket up and eat that surface disturbance.

With that said, I still have hope that I will find a fish that will change my mind.   Posts like this one from Steelie Mike give me hope.

Nobody ever gets laid without putting forth some effort, right?
Posted by Millsy at 7:52 PM No comments: