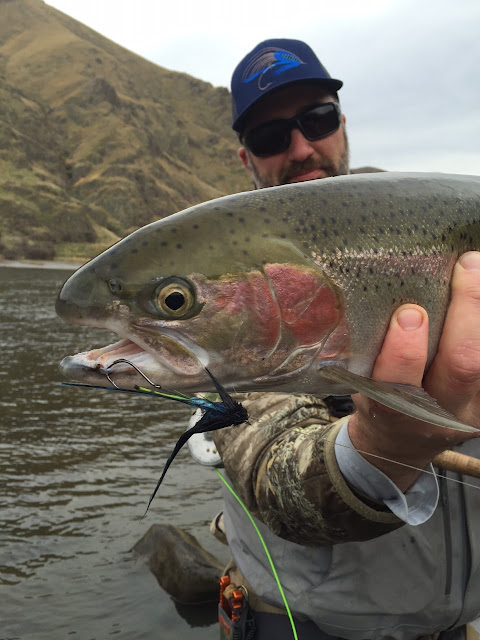 Grabs come in all shapes, sizes, subtleties,  and levels of aggression.

Sometimes those grabs just dont stick.  You're asking a fish to hit a moving target and no matter how properly your fly is constructed, the arrow doesnt always hit the bullseye

On the other hand, landing a particular fish is just meant to be.  Take a peek at this example.

The grab was violent, suggesting that the hook had buried in the proper place in the fishes mouth.  When we landed the hatchery hen and took her ashore, I laughed when the hook fell out of a tiny piece of skin on the outside of her jaw.

It was literally the luckiest landed fish of my life.

It was just meant to be.
Posted by Millsy at 5:49 AM No comments: 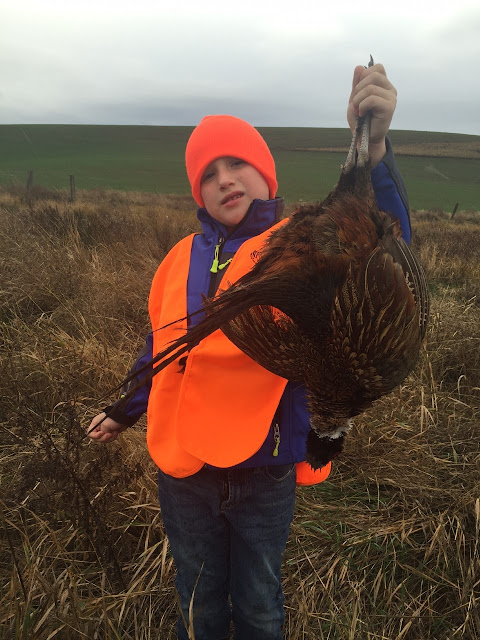 The dogs quivered in their kennels as we parked to hit the first piece of cover.    They dropped me off and drove back to the other side of the cover belt and we would meet in the middle, pinching the birds together

Approaching their position, I could see one big orange coat followed by a much smaller coat.  Big C's first pheasant hunt was in motion

6 years ago with the arrival of my first son came the excitement of having a partner in the field and on the river, just like my father and I.  Resisting year after year to overdue it and expose him and his brother too early he was finally ready to go.  Big enough, strong enough and showing some excitement to join his father and OMR.

A couple of hens got up out of range but the dogs indicated that there was more.  As we got closer to each other we let the dogs really get to work

"Watch the dogs buddy, they're getting birdy"

Finally the dogs hit paydirt and the rooster rocketed up at 15 yards going left to right.  Close enough to take my time and let the bird elevate

Shocked that I missed such an easy shot and filled with a bit of terror that I wasnt going to bring home the bacon on Big C's first experience, I re-steadied and let the pellets roll.

The wild rooster crumpled to the ground 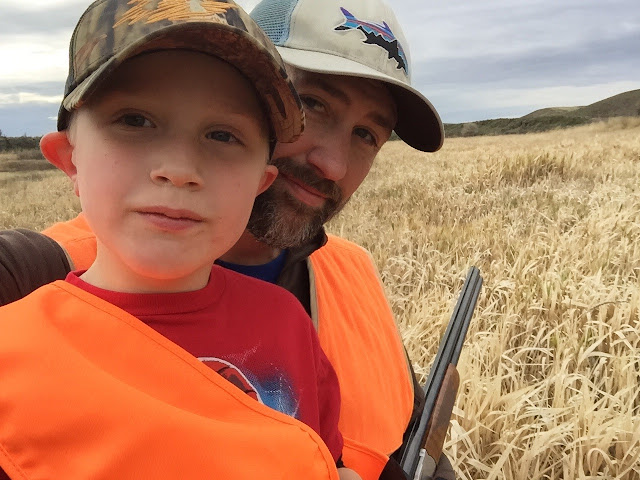 One more bird later and a lot of walking, we called it a day a bit early.   You could see how tired he was getting by how many times he fell in the tall grass and the last thing we needed was to turn it into a forced march.

He played the roll of a typical 6 year old.  Asking questions about funny stuff, his imagination and focus wondering from time to time.  Still he saw a glimpse of what we do when we bird hunt and I knew we won the day when he said this to OMR and I at the end of the day.

"Can we go pheasant hunting again"

You bet we can buddy, you bet.
Posted by Millsy at 7:22 AM No comments:

The Frank Moore Steelhead Sanctuary needs your support.  Join the Backcountry Hunters and Angler's petition to push our legislators to put this bill into law.

Posted by Millsy at 9:14 AM No comments: 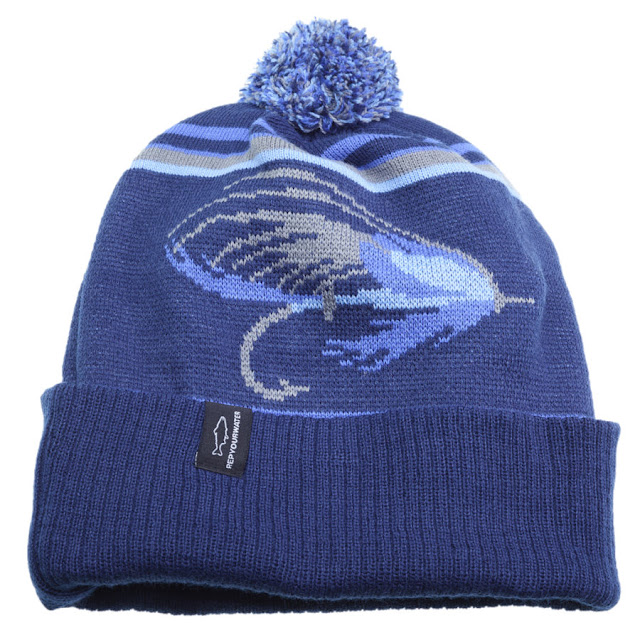 In the upcoming months, I will be standing in near freezing water with wind screwing with each of my casts.  Typically it's a war of attrition.  Who can stand there long enough to get the elusive grab?

Its been a bummer year on the fish catching front.  I can used every advantage I can get.

My ears would greatly appreciate this beanie.   Think you can hook one up from Rep Your Water?

Jokes aside, check out the 13 new varieties of knit caps by our good friends at Rep Your Water. Aside of the fleece lined goodness, they donate 10% of the proceeds from their goods to rock solid non profits like the Wild Steelhead Coalition.
Posted by Millsy at 6:00 AM 1 comment: 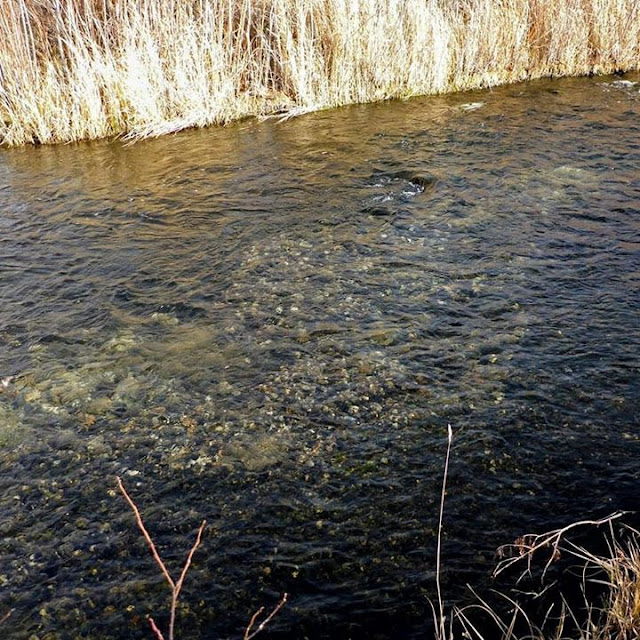 Take a good gander at that coloration change in the picture above.  It's a Brown Trout nesting bed, aka a "redd"

Burn it into your brains.

Now couple that info with the fact that Brown Trout are Fall spawners and you now are an enlightened angler.

Right now wherever you can find them, browns are doing or staging to do the sexual tango.  At the same time, the predacious and nasty streak they have in them becomes focused on protecting their reds.  Along with with they're typically spawning in relatively shallow water and or in smaller tributaries, they become easy pickings for the less scrupulous angler.

Ladies and Gents, maybe you should leave them along right now.

Ask yourself, is it worth it to show post up a picture of a fish you caught defending a red so you can collect likes or glorify yourself with a slew of ego driven hashtags?

Every fish we pursue has their own different times we just need to leave them alone.  Rainbows in the late spring, steelhead at the end of their journey, so on and so forth.   Let them do their thang, make babies and propagate the rivers and lakes with healthy populations.

A big thanks to the West Yellowstone Fly Shop for their leadership on this issue.
Posted by Millsy at 5:30 AM No comments:

Labels: Brown Trout, Dont Rape The Reds, Let them have sex in peace 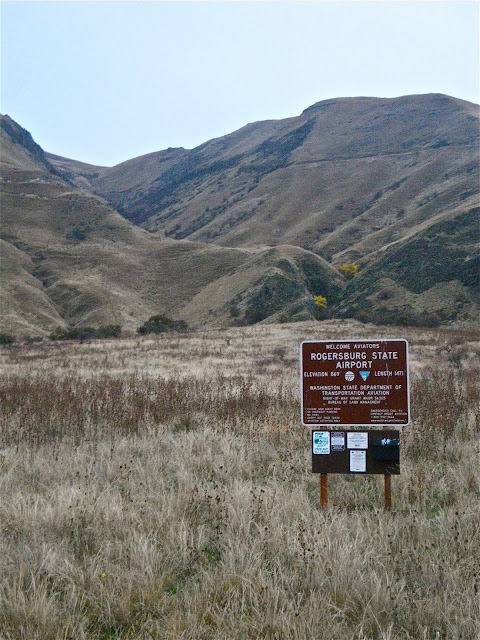 The things you see while on the trail of feather, fur and fins.

I always get a kick out of this place.  The weeds tend to conceal the landing strip and there welcoming crew consist of Mule Deer, Chuckars, Quail, a mangy Coyote and maybe a herd of Elk.

Right smack in the midst of thousands of acres of public land, the log book has about 4-5 planes a year.

It's at the gateway to Hells Canyon, with canyon walls providing a glorious backdrop to what I have to believe is one hell of a place to land a plane.
Posted by Millsy at 6:05 AM No comments: 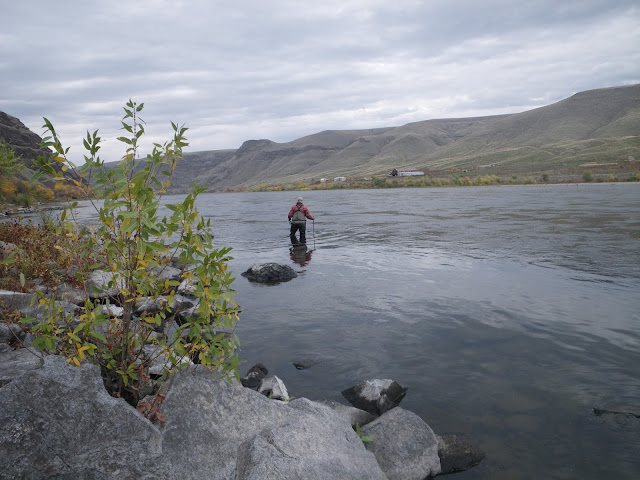 November 14th is Spokane's opportunity to express why it's time to #freethesnake.

There's a couple of events leading up to the Public "Open House" at the Historic Davenport Hotel in downtown Spokane.  Let's really be honest, these public hearings are a sham at best.   The open house format is meant to deflect away from what's really at hand, the possibility that it's time to take out these salmon and steelhead killing dams.

But what we can do is show up in force, peacefully speak our minds and tell the federal agencies that it's time to take out these deadbeat monoliths of yesteryear.

First join us at at the Rotary Fountain in Riverfront Park at 3:30pm with a rally hosted by
Save Our Wild Salmon

After the hearing at the Davenport, the party moves to the Post Street Ale House to celebrate everyone's effort and the possibility of a free flowing Snake River

Come be a part of a big time opportunity, see you November 14th.
Posted by Millsy at 9:44 PM 1 comment: