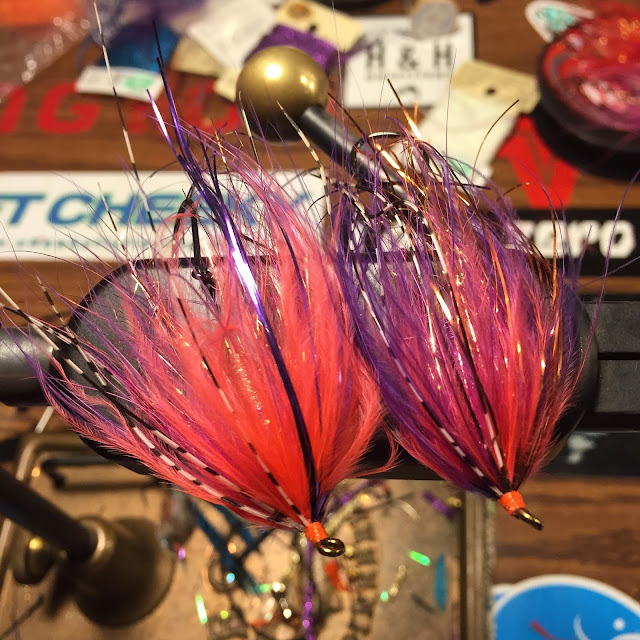 The long and short of it.  Maybe.

On the eve of my first and last winter steelhead trip of the year to a river system that I've never been to, the nagging question still remains.

The color pallet is full of choices, 4 boxes are full, sizes are varied, sink rates accounted for.

I better go tie one more fly.
Posted by Millsy at 6:36 AM No comments: 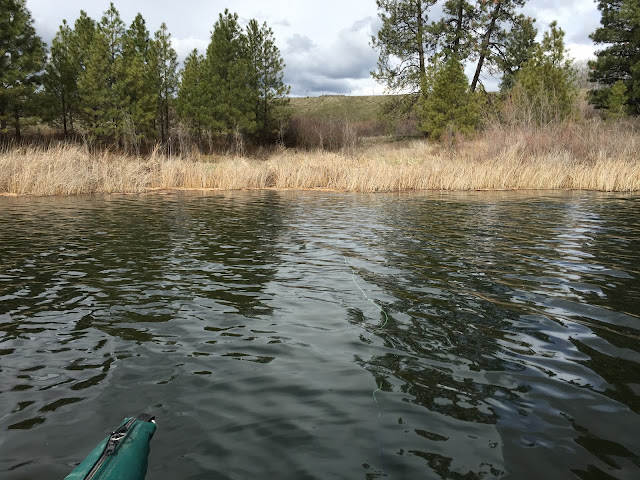 That time of year is here.

Any pull on the end of a fly rod is a gift to me, but there are certain ones that mean the more than others.  Fish that swim to the ocean and return mean the most and the hierarchy descends from there. Months of prep, tires chewing blacktop in search of and actual time on the river.

8 solid months of single minded devotion, at least within the fishing realm

Still there has to be a pause.  An extended breath in the intensity because without it burnout would most certainly come sooner than later.

So a smile comes across my face as I rig up the tiny bugs, get in position on my pontoon boat, set the bobber to the right depth and chuck it out onto the lake.  Let it sit for a spell and then run out another offering 10 feet to the left.  And so on and so on, on a happy autopilot setting.

The In Between is a happy, reflective place. 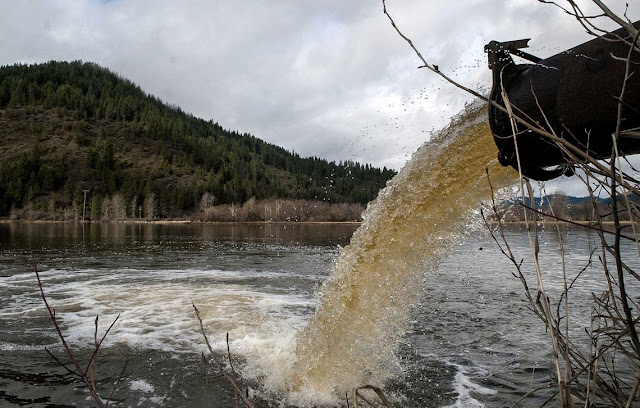 There is an important public for private land swap that needs your comments, now.

As you can read more here in the Spokesman Review's front page article,  there is a critical land swap being proposed that would pay high social and environmental dividends on Black Lake and the Coeur d'Alene River in North Idaho.

Current landowners of the former Marshall Chesrown's horse ranch and state officials are ready to make a land swap that would restore critical wetlands along the Coeur d'Alene river and stop the pumping of toxic water into Black Lake, one of the chain lakes in the Coeur d'Alene system

For decades, pumps have drained the natural wetlands and in turn put the waste water into Black Lake.  Ag waste, animal waste and the lingering effects of mine waste make their way daily into Black Lake causing significant environmental damage.

Residents of Black Lake experience consistent toxic Blue Green Algae blooms.  Kids under 7 are not advised to swim in the lake.  Dead and tumor filled fish are regular occurrences, as are dead tundra swans that use the lake in their annual migration routes

It doesnt stop with Black Lake.  As the saying goes, the SH*T always rolls down hill.  The contaminated water flows through the chain lake system, into the river and eventually into the crown jewel of North Idaho, Lake Coeur d'Alene 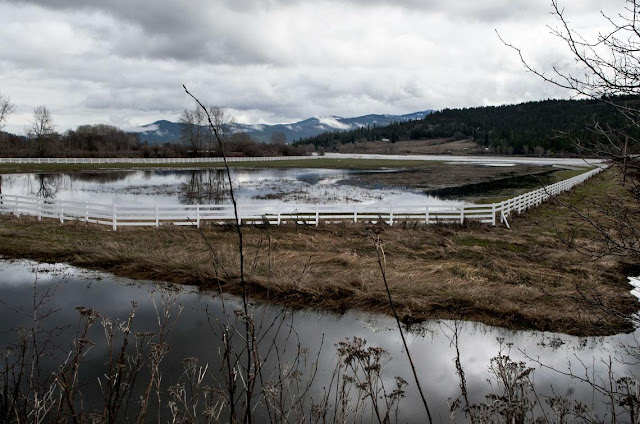 This land swap is a no brainer.  The timbered land near St. Maries that it's going to be swapped for is likely to be sold by the state eventually as excess land disposal (aka, new private owners anyways)

Improved water quality is just the start of the list of benefits that would occur with this land swap.   Public health, vital waterfowl habitat, fish health and survival, sportsman's access, public land access, and so many more reasons.

The tribes are in favor.  The EPA is in favor.  Most parties involved are very much in favor

Who's not..?  A vocal minority in the area fears the loss of hunting access or potential poor land management by the new owners.

Well guess who's probably not going to let them hunt in the future.  Anyone who buys the land, logs it and restricts access.  Land swap aside, the excess land will likely be moved off the public register.

So why not be a part of restoring critical habitat, access and reduce pollution in one fell swoop?

Public comments are due by March 28th.  Please check out this web site for great information and directions on how you can help.  There's links to send comments, links to all pertinent articles and further information as to why this land swap is good, good, good.

Posted by Millsy at 7:02 AM No comments:

Behind The Emerald Curtain Showing in Seattle


Behind the Emerald Curtain Official Trailer 2015 from North Fork Studios on Vimeo.

The Wild Steelhead Coalition is proud to present the Washington premier of Shane Anderson’s award-winning film Behind the Emerald Curtain. The premier will be held at the Patagonia Seattle store on March 24th – doors open at 7 :00 and the movie will begin at 7:30. Following the event, Shane and noted author/professor David Montgomery will participate in a panel discussion.

Behind the Emerald Curtain is a short form documentary/expose that illuminates the destruction of Oregon’s iconic watersheds from massive clear cuts and the spraying of toxic chemicals. The film chronicles how these activities are compromising drinking water sources and threatening some of the last wild salmon strongholds, while corporate timber giants take advantage of out of date forestry laws to make record profits.

If you're in the area, I highly suggest you should be there on the 24th
Posted by Millsy at 8:25 PM 4 comments:


Chuitna - More Than Salmon On The Line from Trip Jennings on Vimeo.


Another place to advocate for.

Get on board, now.

More info available at Save The Chuitna's web site.
Posted by Millsy at 1:57 PM No comments:

The River Fly Shop on the CDA River... 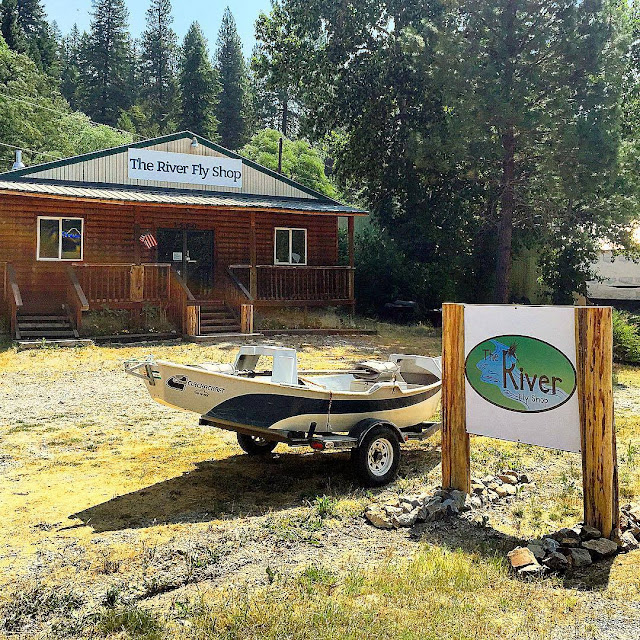 Another great resource for fly fishermen and women has recently opened up on the North Fork of the Coeur d'Alene River.

From the Stetsons, the owners of this great new resource on the river.

The River Fly Shop is located on the North Fork of the Coeur d'Alene River in Kingston, ID, just a mile north of I-90. We have a huge selection of flies, nets, rods, reels, magazines and more! Some of the brands we carry include; Temple Fork Outfitters, Black's Flies, Nucast, ARC Fishing, Catch Fly Fishing and Loon Outdoors. We offer shuttle services and are in the process of getting canned beer and drinks in our coolers. We are also instructing multiple Introductory to Fly Fishing classes throughout the season and people can find out more information about them if the give us an email or there is more information about it on our facebook page. Our website is theriverflyshop.com and we are on facebook and instagram under The River Fly Shop!


Before the fly shop, setting up shuttles on the NF of the CDA was a bit of a crapshoot.  Sometimes there'd be someone available at a local tavern or restaurant, other times there was nothing.

It's always a funny feeling to hand off your keys to your rig to someone who you dont really know or just was bellied up to bar.   Rounding the corner at the "get out" on any river and having that twinge of anxiety before you see your car is something I can live without!

Having a reliable source of information and a trustworthy shuttle service is a welcomed addition to this great fishery.   Stop in and say hello when your on the river. 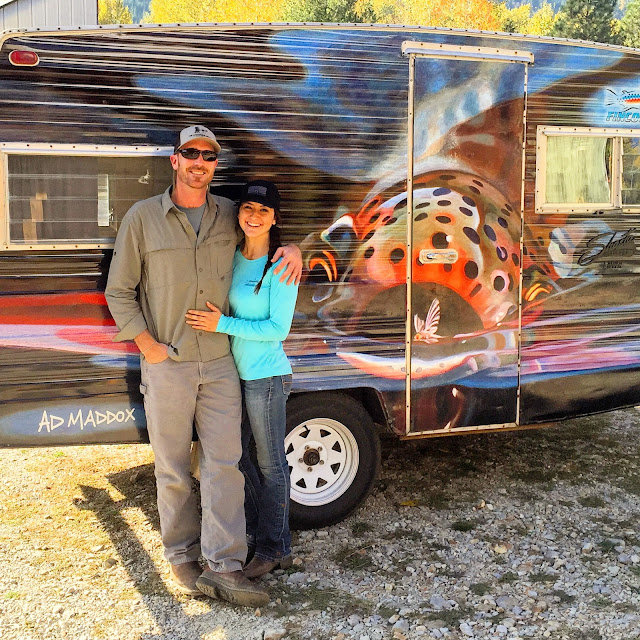 Posted by Millsy at 8:48 AM No comments:

Newness from Rep Your Water 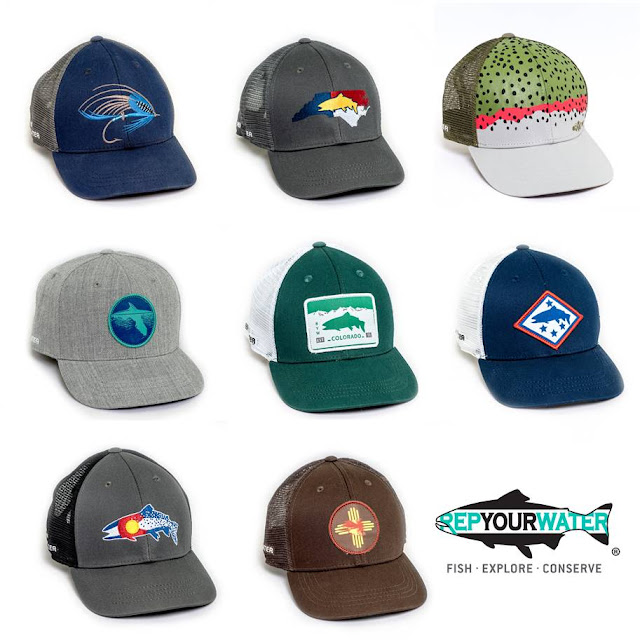 You can never, repeat....never have to many hats.

The team at Rep Your Water  has introduced their new spring lineup, and the hats above represent a small portion of what's now available.

Additionally, they've addressed some of the issues that guys and gals with big domes had with their previous edition of their hats.   I can attest that the newer fit option is so much better for my 7 1/2 hat size

Dont forget, Rep Your Water is a partner in no less than 11 conservation organizations, giving a portion of their proceeds directly back to groups that lead the way in outdoor conservation.

Check your local fly shop also to see if they carry the Rep Your Water line, or order directly.
Posted by Millsy at 7:08 AM No comments:

IF4 To Benefit Spokane River Redbands 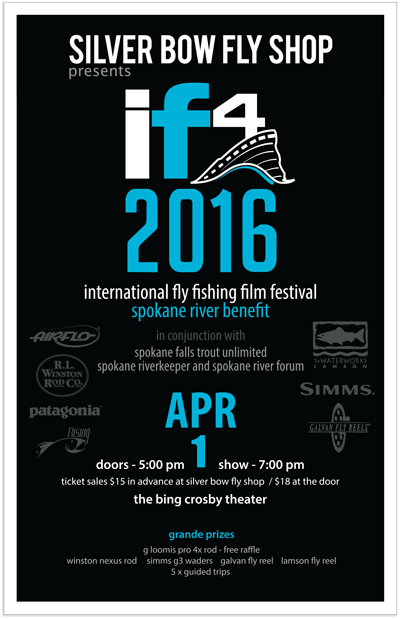 April 1st, you know where you need to be.

Last year's event was a mega success, funding important research and a much needed boat slide that improves angler and river user access.

Pick up your tickets HERE.  Dont wait, it was damn near a sellout last year.
Posted by Millsy at 10:38 PM No comments: 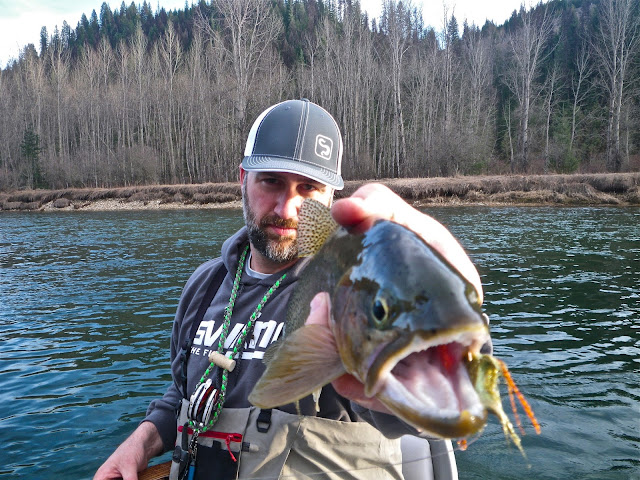 Chuck the meat and you never know what to expect

The eats are all different, but they always come out of nowhere.

Some cautiously come up, inspect and then inhale

Some hit it like they they were shot out a cannon....

Others repeatedly inspect, swim away, come back, inspect, go away only to come back on fire