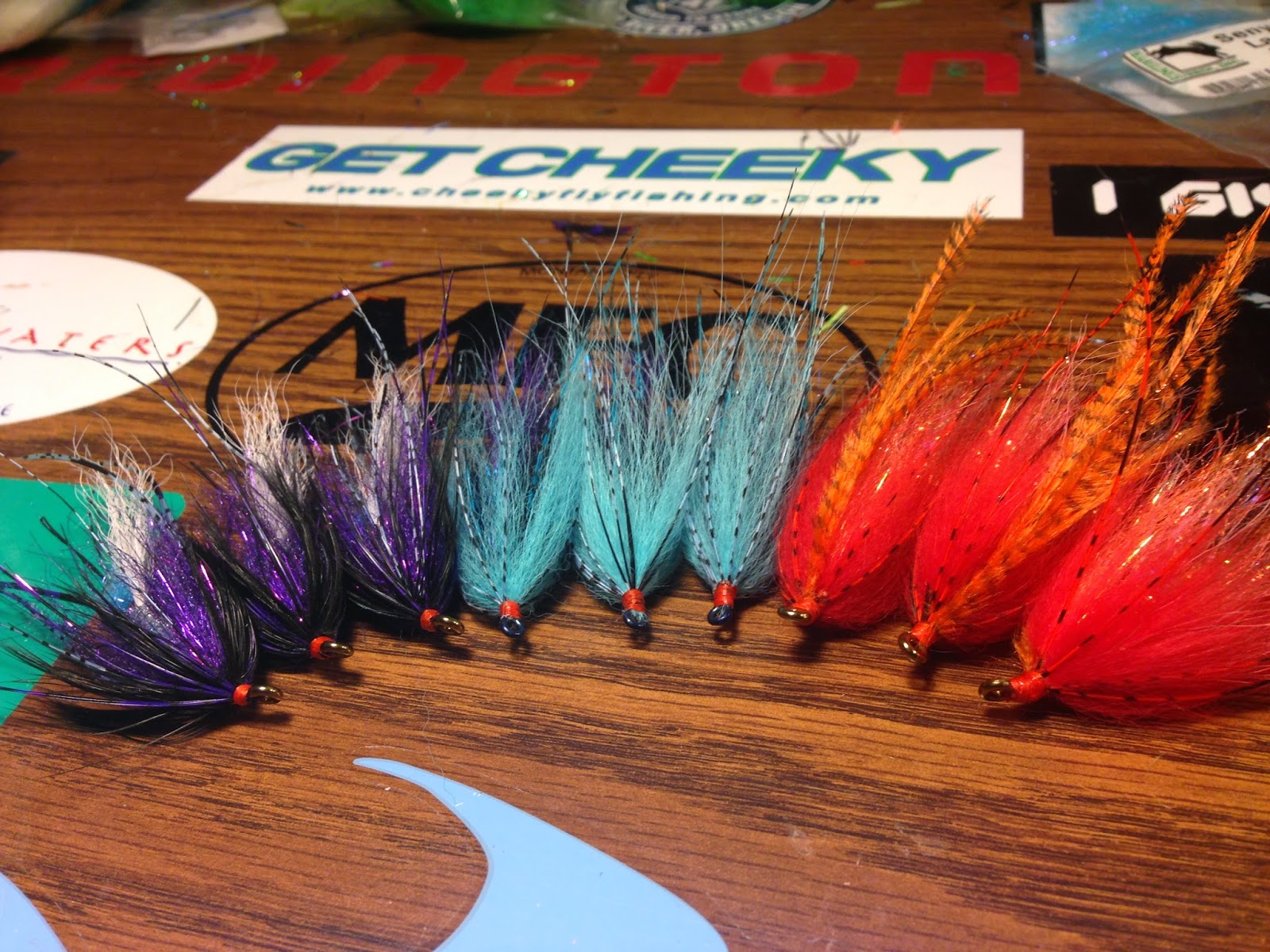 You can only watch so many SportsCenter repeats or Seinfield reruns on the couch before you go nuts.

When you're barred from the day job because the flu has taken over your body, the only thing else you can do to save your brain is wrap bugs.

Interested in small scale custom steelhead bugs, shoot me a email at jmills81 at hotmail dot com
Posted by Millsy at 10:57 PM 1 comment: 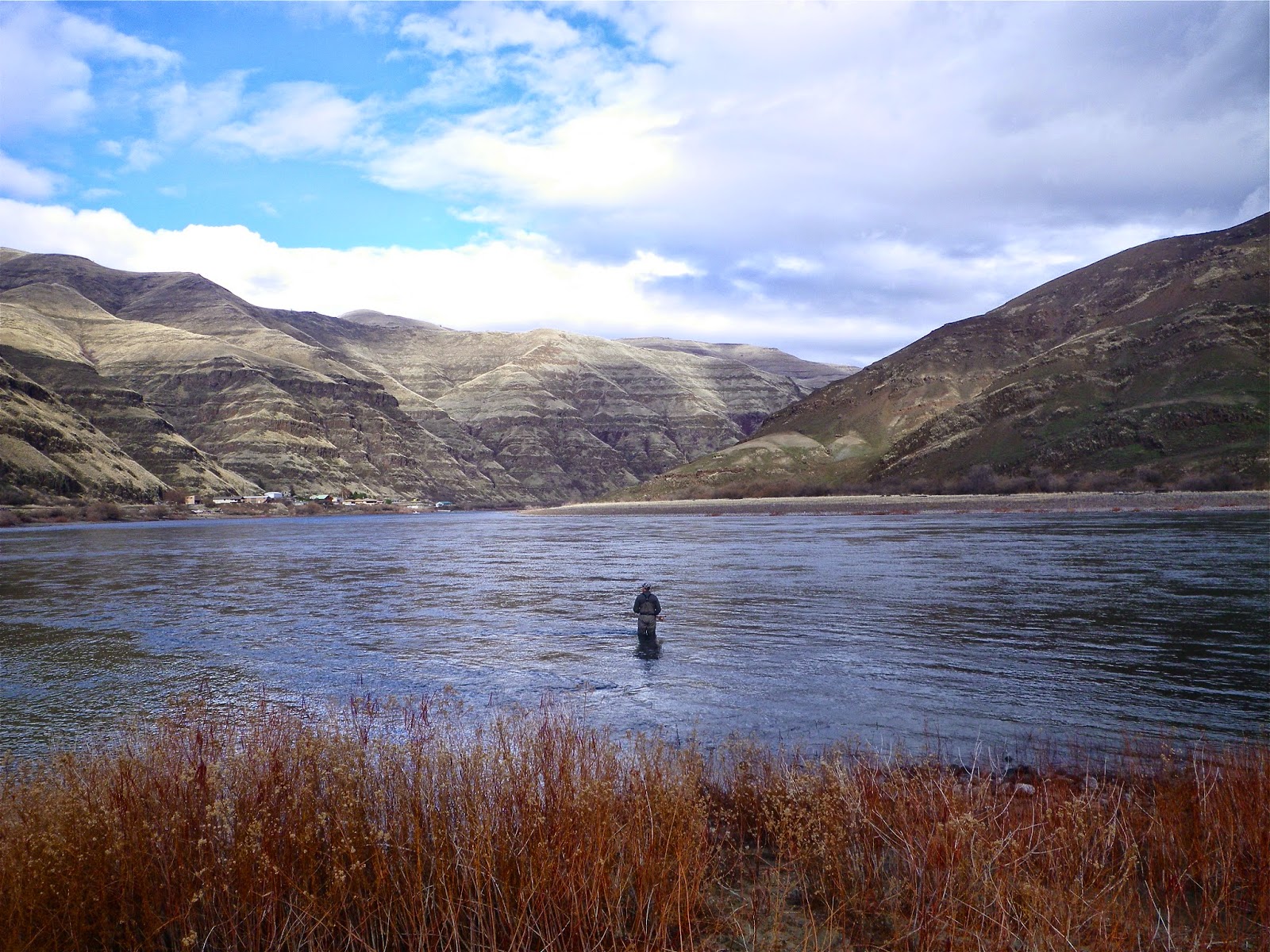 This is where my mind goes when sitting in sales meetings.

"You need to focus on these three priorities"

My face says I am engaged in the meeting.  My mind on the other hand, na so much.

The cast is entering the meat of the swing, and I know that pull is coming. 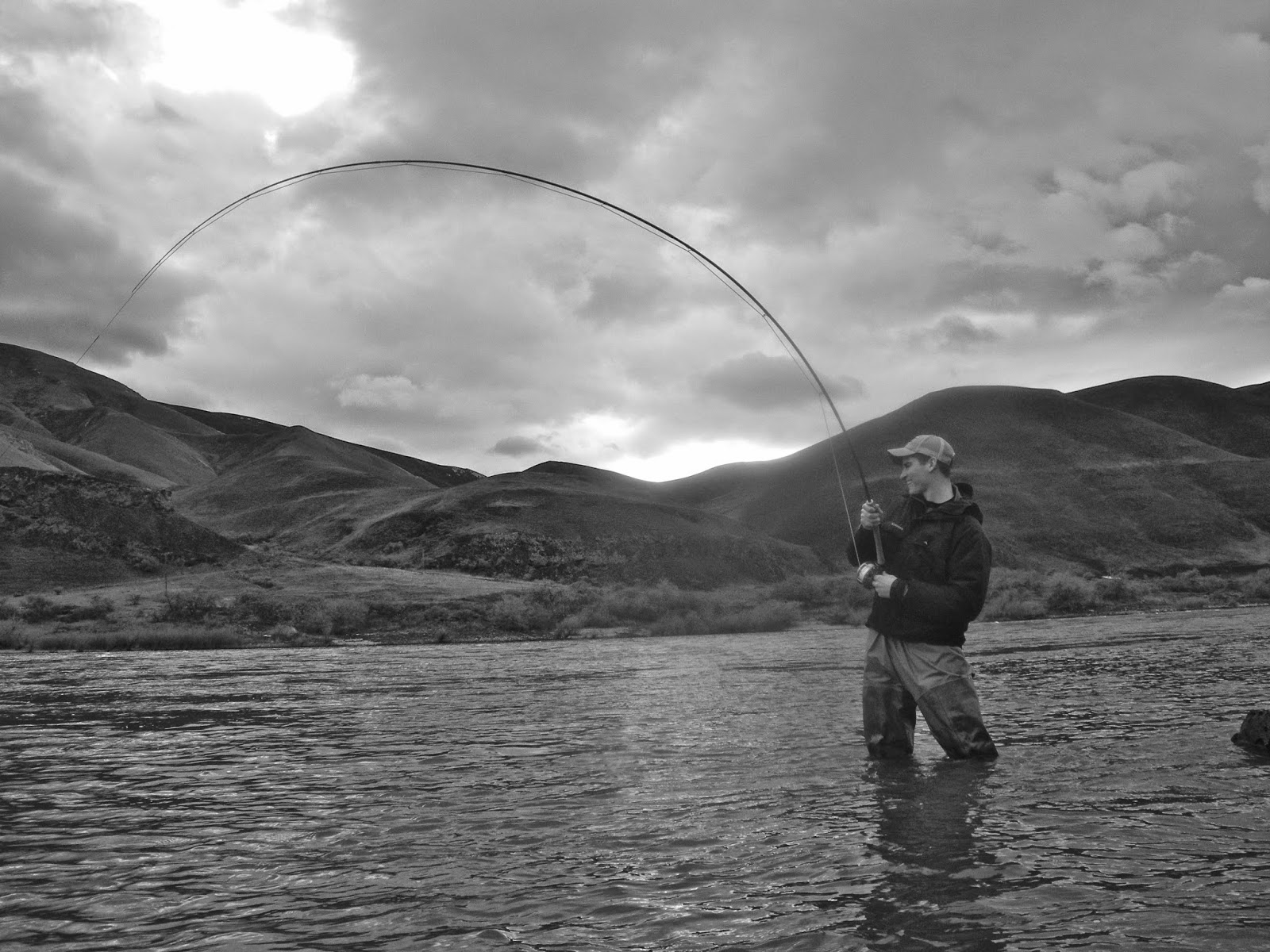 The USGS graph went nuts the night before on the tributary of the big river and we all knew what we were going to see when we got to the river.

There's levels of clarity, and this was upper end stuff.  Maybe 6 inches of visibility, meaning we had to get above the trib to find runs to swing a bug with the hopes of finding a fish or two.

Non the less, stubbornly we decided to at least wader up at one of our favorite winter runs and give it a shot.  We all shook our heads when stepping into the water because the likelihood of swinging a fish in this crap was about as good as the Seahawks comeback last Sunday

My buddy took honors to go through first as he was riding a solid cold streak.  Stripping out maybe half of his skagit head, he rolled it out MAYBE 15 feet and out of habit, threw a mend in the tiny cast

In the process of turning around to talk to me he got blown up.

We started laughing because of the absolute improbability of what just happened.  It's hard to express how much the river looked like flowing chocolate milk.  Still, the fish ate. 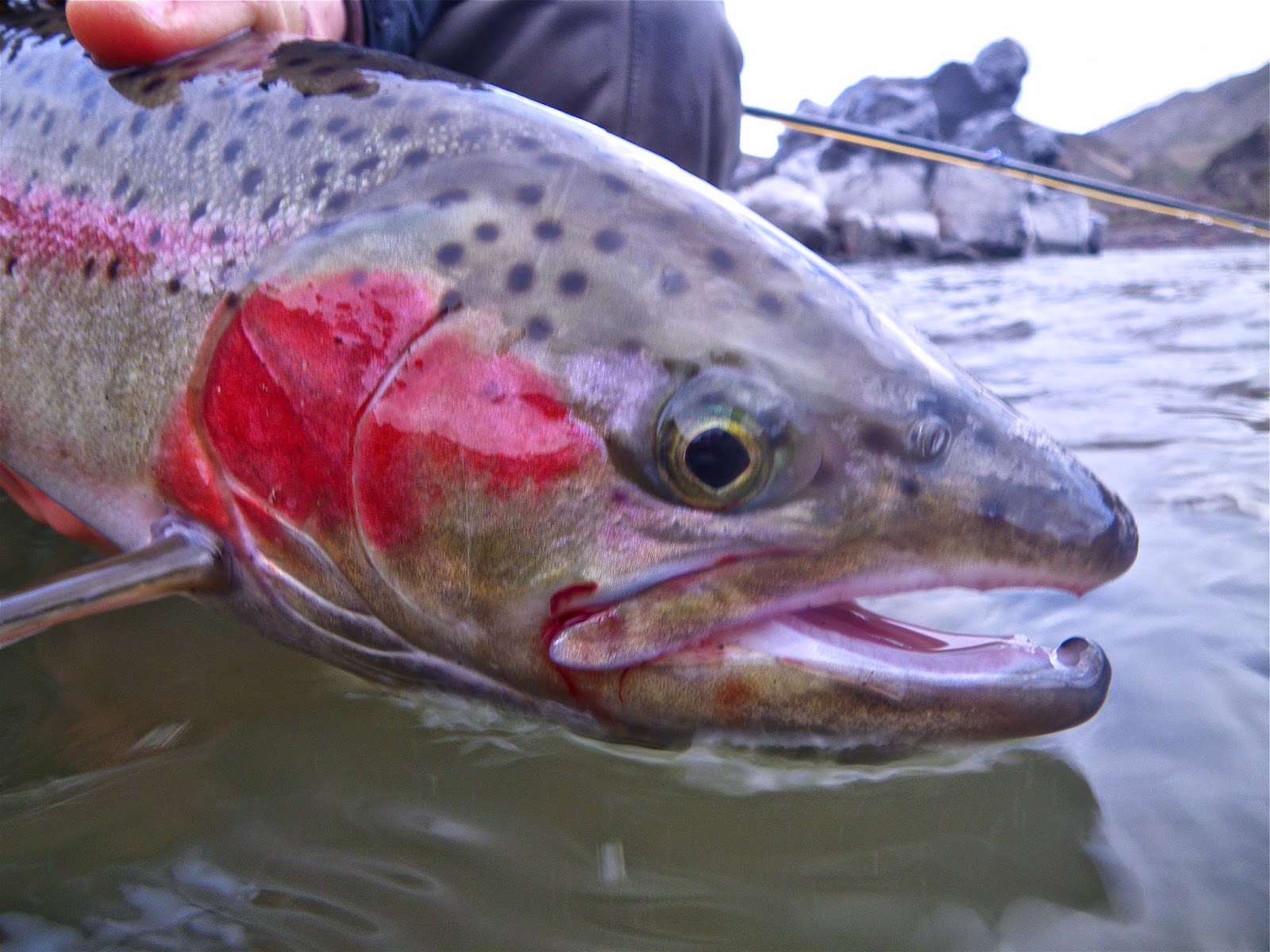 It was a typical hatchery male that fought well for it's size but succumbed to the rock shampoo at the end of the fight.

So it just goes to show, you can still find a fish in the middle of chocolate milk.

Labels: bad water conditions, go get out there, Steelhead

Connected by Water from Labrador Productions on Vimeo.

Fellow Spokanite Kevin Inui and friends have put together a nice short video of his 2014 season, and is in the running to win the annual Sweetwater Fly Shop Video Shootout.

Give a peak and if so inclined, help him bring home the title

More info on the contest HERE
Posted by Millsy at 9:01 AM 1 comment: 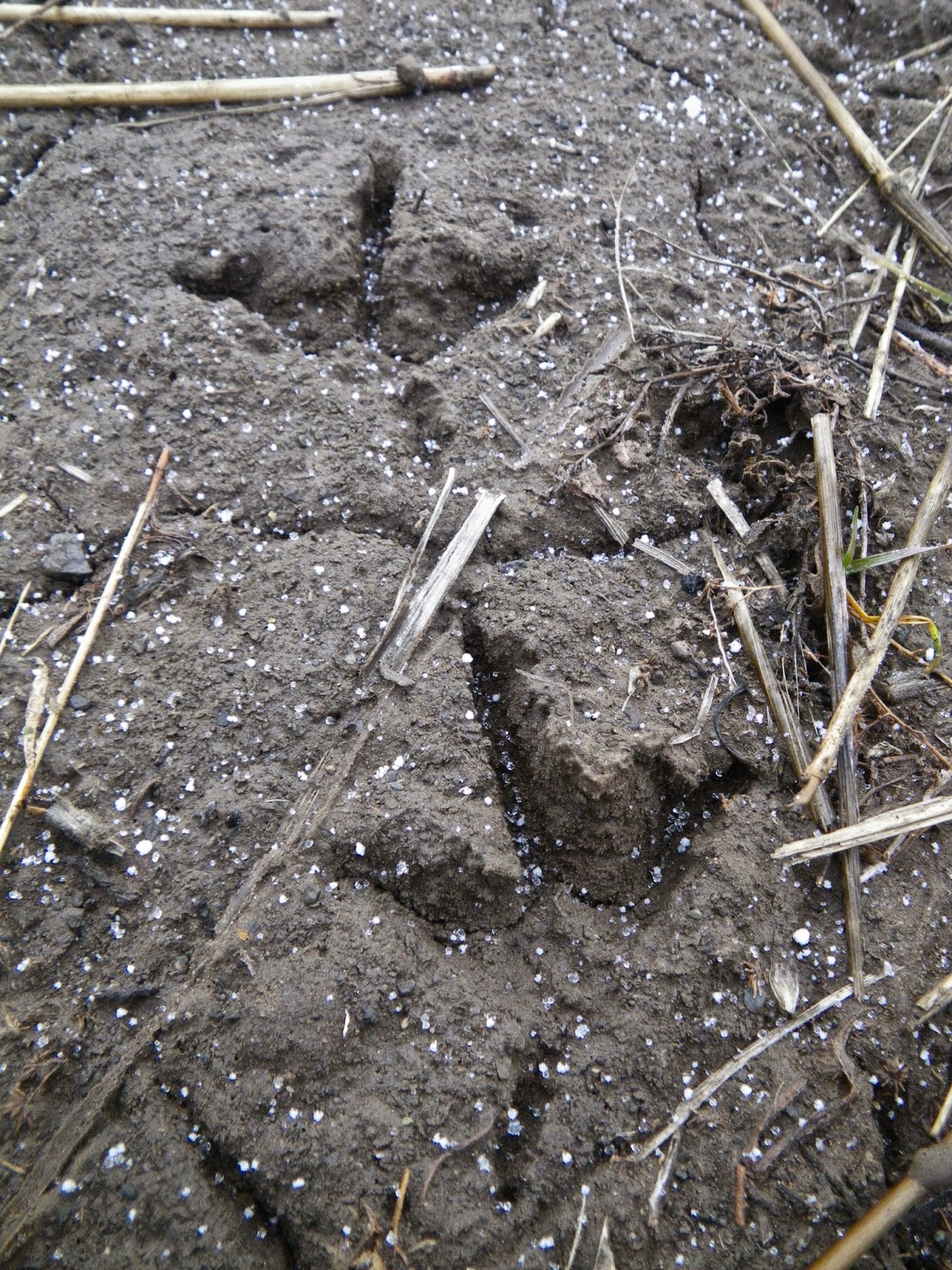 Growing up, ditch parrots were my driving passion.   Now, there's so little time and so many other responsibilities that it's tough to choose when steelhead are in the drivers seat.

This upland season I carried the scattergun on 2 days afield.  Almost embarrassing.

The first day was cold beyond cold.  So cold that I wiffed on two absolute gimmees, shots I've made in my sleep since I was 12.   Thankfully I found a willing pheasant to close the day to save some of my pride.   Miss the easy shots, smash the hard ones.  Go figure.

January 11th marked the final day of the season in the state of Washington, and we walked the familiar fields that we have for over 20 years.  The birds were scarce as they are at the end of the season, but for some reason luck was on my side 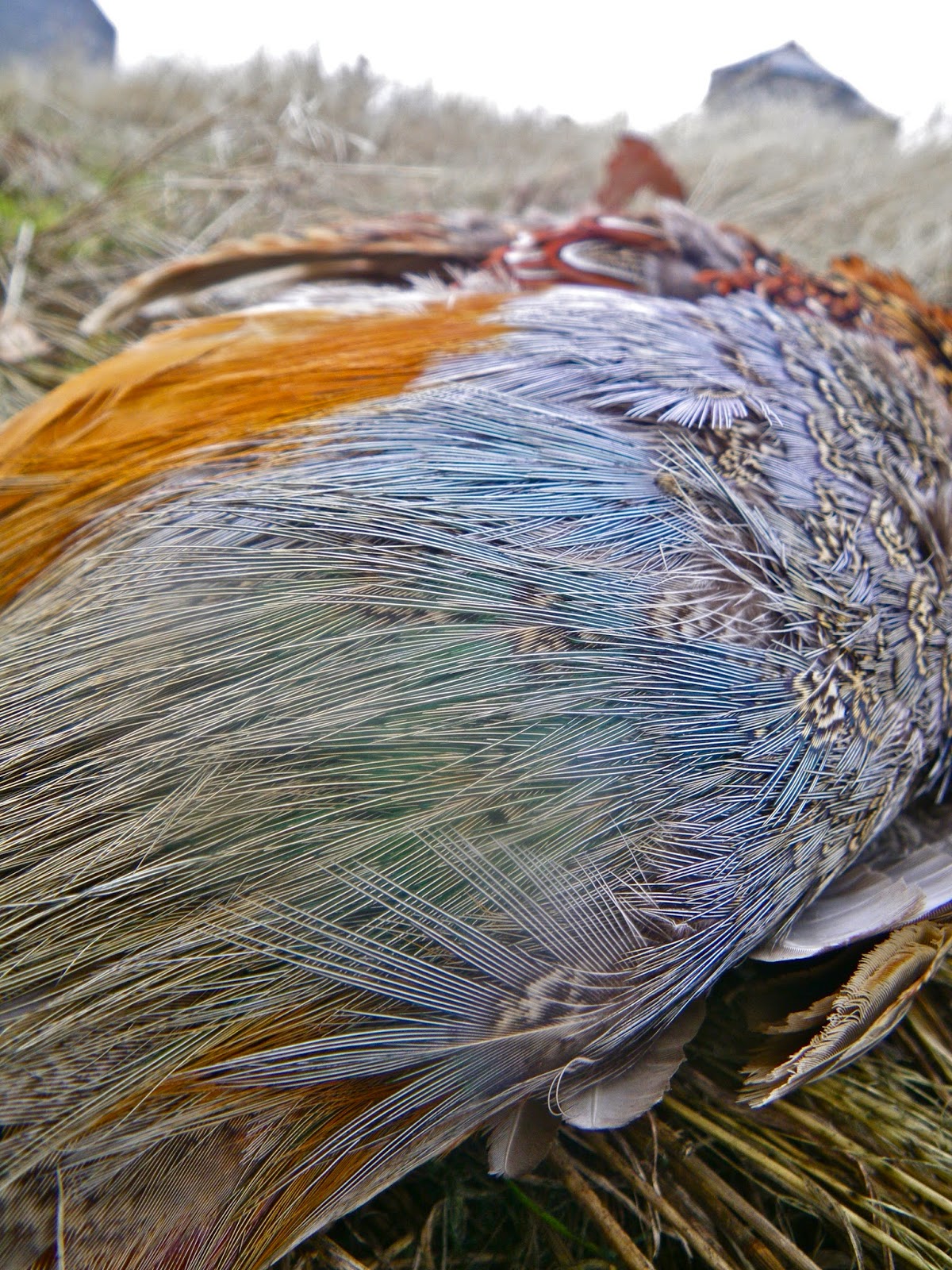 Wild roosters on the last day of the season are worth their weight in gold.  2 graced my game vest and I fell in love with these upland birds all over again

Priorities may change, but first loves are never forgotten.
Posted by Millsy at 10:56 PM 1 comment:


I received quite the email today.  What a steaming pile it was.

The Environmental Policy Alliance (cough...shell company....cough) has released a video that claims that groups like The Theodore Roosevelt Conservation Partnership, The Isaak Walton League and Backcountry Hunters and Anglers are just green decoys, groups masquerading around as fronts for massive anti sportsman, anti gun, liberal organizations

Hold on a second there,  It takes all of about 3 seconds of typing on google to get a feel as to the Environmental Policy Alliance and their work.

This group is a front for  DC lobbyist Rick Berman of Berman and Co.   .

Do you really think that these three organizations, with all their employees, all their volunteers, all their time on the ground protecting our open spaces, our rights as outdoor men and women would risk all that they have done because they are trying to push "liberal agenda"

Take the TRCP for instance.  Their mission is to "Guarantee you a place to place to hunt and fish." Spend five minutes on their web site and go ahead and find something other than hard working people pushing their mission to keep our public lands open and available to use

The Issak Walton League was founded in 1922, hell of a long time to be be on the take right?

Backcountry Hunters and Anglers....hell I've been to their events in person and I can personally tell you I would have had a hell of a time anti gun non hunter in the bunch, trust me.

I openly wonder if these three groups are being attacked in such a manner because they prevent development and energy extraction on public lands.  Hmmmmmm.

So back to the other EPA.  If they're claiming these organizations are green decoys, then what are the companies that are funding this PR firm

Just as a sneak peak, from the Huff post article above, on some of the quality initiatives the parent company has taken on

"Berman & Co. has previously attacked organizations like the Humane Society of the United States and Mothers Against Drunk Driving, and campaigned against minimum-wage increases and unionization."

This video is meant to piss people off.  It's meant to be divisive.

Let it piss you off into action, and here's what I propose:

Support these groups that they're attacking.  Make a donation.  Help them in their efforts to keep our lands open for enjoyment.  Our outdoor culture depends on wide open spaces of public land.

Volunteer your time.  Put your boots in the dirt and do something to help

And for the other guys.  Meh, dont waste your time. 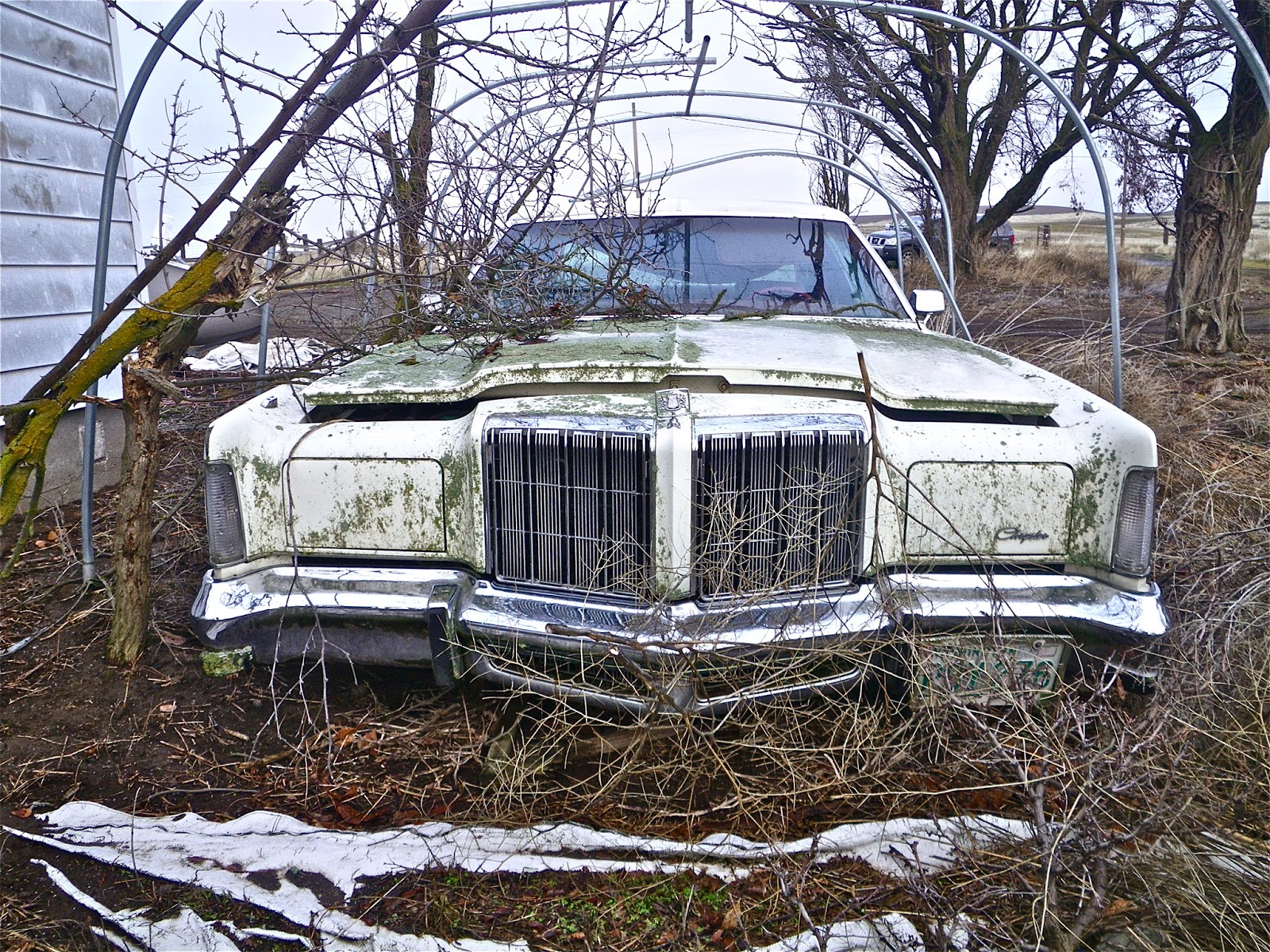 Abandoned farms are fascinating to me.  Old building, gutted farmhouses, a million pieces of equipment .   Outbuilding after outbuilding and barns.   Oh yes, barns in all states of disrepair.  They speak to the shrinking of the farming class,  children moving away from a rural life and nobody's there to take over the farm when mom and dad get too old.

The land is leased to another farmer and is still in use.  Cattle still stare at you with a suspicious eye and pheasants sneak around just as always.

This particular farm has my favorite relic.  It's a Chrysler, and she's a beaut.   The doors are open and inside is the June edition of some paper like the Western Stockman and cigarette butts are still in the tray.    My guess is this was a reward for the farmer who finally had some great years of wheat prices and it was his baby.  I can see the dust rolling down the dirt roads, rolling in style on the Palouse. Huge white cowboy hat and Marlboro lit up as Conway Twitty sang away

Today, the land yacht aint so pretty.  Mice call her home and the headliner is falling onto the seats. Still beautiful in a different way as a reminder of a generation gone and a family farmhouse never to be lived in again.

Nature is taking it all back, creating more cover to find a rooster hiding about.

There's a real beauty in ruins
Posted by Millsy at 6:19 AM 2 comments: 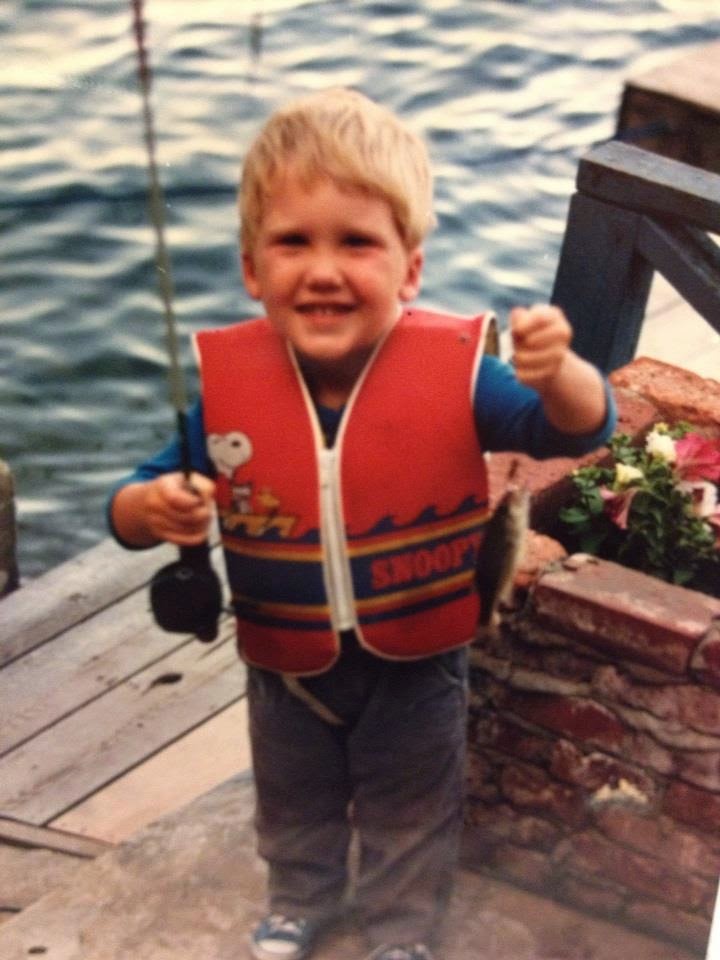 Its been in the blood since the beginning, you've never had to ask me twice to go fishing.  In some cases, I took it upon myself to go by myself, even at a very young age

My parents had a cabin on a lake north of Spokane for my entire life.   Right on the water, it was an amazing place to grow up and spend summers.

In a panic, they searched all the rooms of the cabin and the areas nearby.  As they turned toward the dock, there I was.

No life jacket, sitting happily with rod in had at the end of the dock, toes dipping in the 20 feet of water.

Not wanting to freak me out, my dad calmly came out to me and asked what I was doing. 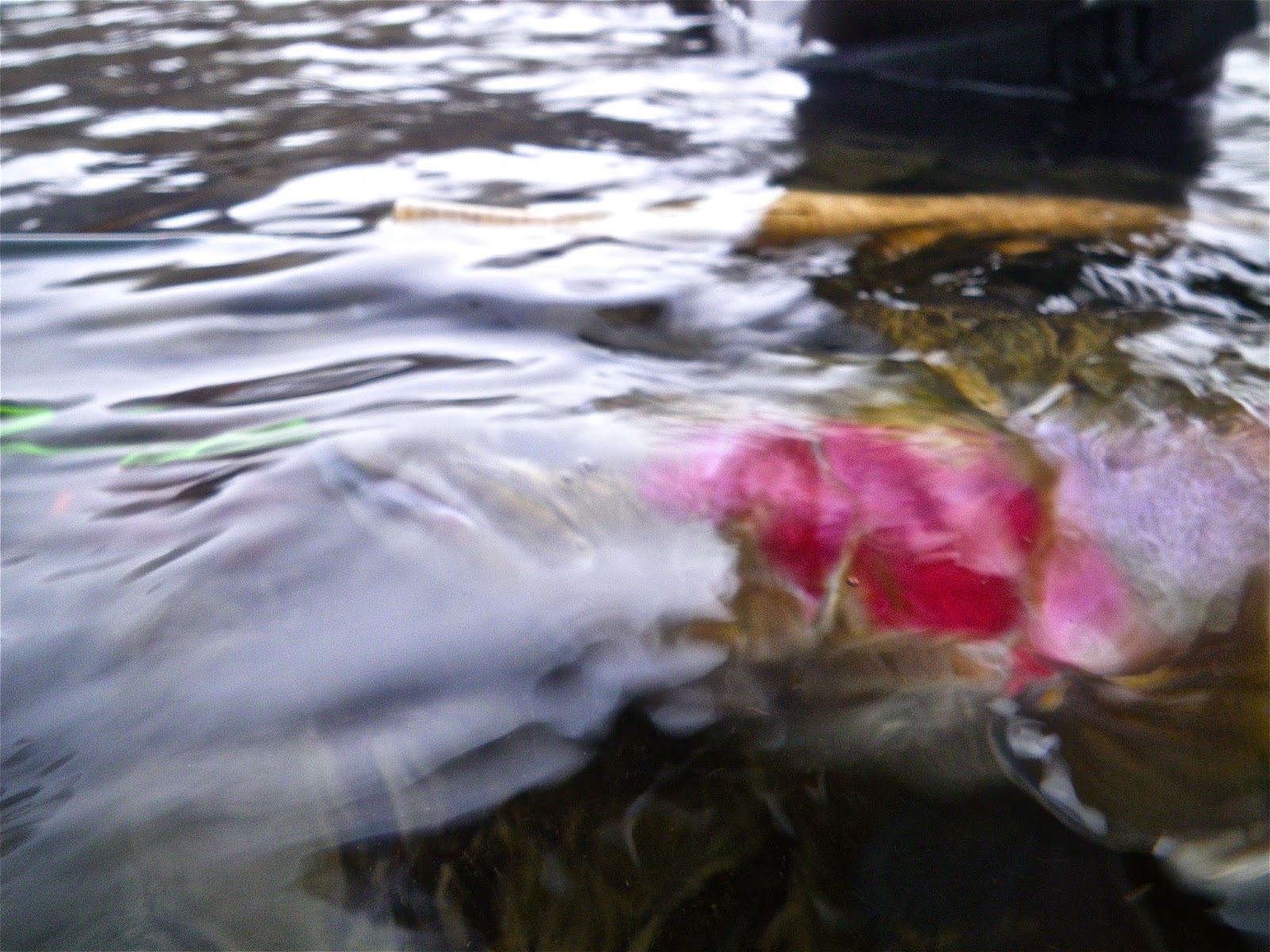 The color variation in these fish are as varied as their collective life history.  Early season bright, late season gun metal.  Double red banded bucks, hens made of mint.

The minute you think you know what you have on the end of your line, just laugh.  You don't.
Posted by Millsy at 11:21 PM 1 comment: