Images from the Weekend 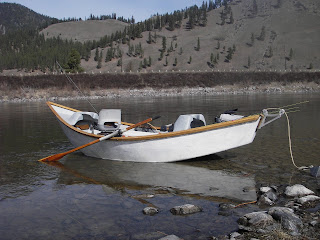 A weekend spent with OMR, crazy lab Murphy on the Clark Fork...in search of a reminder on why we brave early spring fishing on big water--Skwala's and midges. Neither materialized, but two beautiful morning floats followed by huge rainstorms that killed the fishing for the afternoons. Such is life for the Clark Fork in the spring. It's a bitch of a river, but for the off chance of the truely rewarding days, we keep coming back, because we know....it COULD be the day. 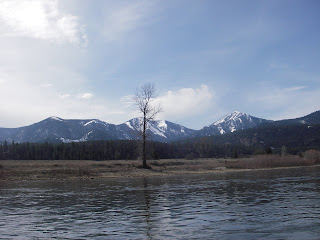 What a beautiful spring Montana morning 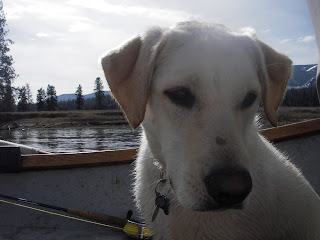 And for the record Murph Dog only jumped out twice in her first drift boat trip. She soon will be a veteran
Posted by Millsy at 9:20 PM 2 comments:

And now...The REST of the Story 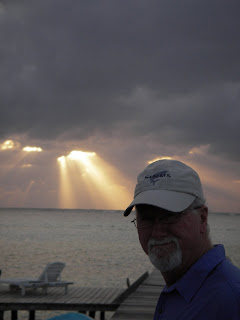 Everything felt right for the last day with Omar and my father. The wind was right, the coulds were right and every time you fish with Omar....he's got a new secret spot

Out we went about 10 minutes outside of San Pedro to a flat that "had dem big tailing bones" We split up, my dad with Omar and I went with Omar's understudy, "D".

Nursing a legit hangover and slogging through DEEP mud is tough, but when big tails are breaching out of the shallows just on the outside of casting distance is a big motivator. This particular flat had places were my big butt sank almost up to mid thigh. True quick sand

D and I battled the mud and got over to the fish. The biggest we caught came all the way 70 feet out following my shrimp pattern. It hit right on my last strip as I crouched and got as low as possible so it wouldnt see me. It blew up right at my feet as I strip set the hook solid 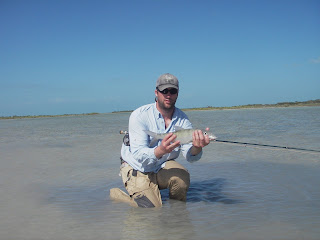 This fish put me into the backing 3 times. After the fight was done, he just sat there and allowed me to take a few more pictures 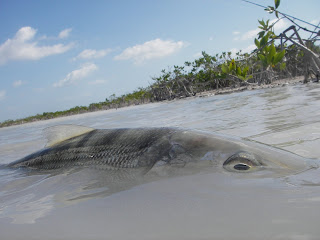 What happened next seemed pretty damn unreal after it all unfolded. We left that flat, and on our way to another, we slowly cruised along, looking for a school of permit that inhabit this particular area. Then it happened, we all saw the flashes of the school ahead of us, parked on a deeper trough on the flat.

Instantly the boat sprang into hurried motion. I wanted my father to take the first shot, so he hops out with Omar while D and I ready the boat and get out ourselves. In 2 feet of water, my dad bombs a cast into the school. Stripping through it caused barely any reaction, but it put the school on the move. D and I waded furiously to get ahead and turn the fish back around towards my dad...and it worked

The school or juvenile permit were headed right to my dad and Omar. He placed his Crystal Shrimp pattern to the nose of the school and instantly, his rod bucked with a fleeing permit on the end of his line. Shouts, hoots and hollers rang out, as hooking ANY permit is an accomplishment

Breaking out of my daze of seeing OMR connect with La Palometa, I refocused with the help of D to get my shot. Amazingly these fish didnt spook out of the area when my dad connected with his....they just kept circling

Moving as fast as I could, we got in line with the school for a shot. I put the fly on the edge of the school and three shot off to battle for my fly, only to refuse and rejoin the school.

One more shot presented itself. One lone soldier broke off the school and busted for my fly.

Now I would like to say I played it by the book, strip set and then up. But shit, when you're hooked up to a ghost, you just hope for the god damn best

Into the backing the permit ran, and at the same time, OMR was still fighting his fish. I couldnt farking believe it, a father / son double on permit

About five minutes into the fight, I remembered I was fishing with a debarbed hook. A note to the wise...dont debarb your hooks for saltwater. The guides just laughed at me when I told them this "These arent trout" they would say. So I prayed to the fish gods that my hook set was good

Finally after about 8-10 minutes, we both tailed our fish. 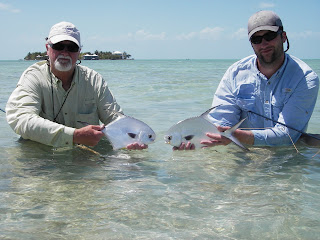 Omar said it's the first time in 14 years of guiding he's ever had a father-son double on permit.

So what do you do when you hook permit...you take shitpot of pictures 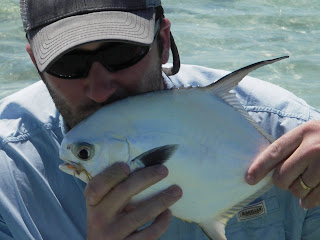 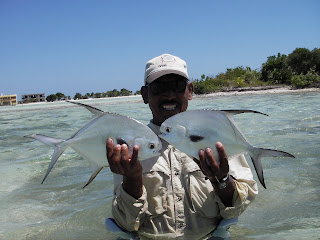 Ahh huh, you know this 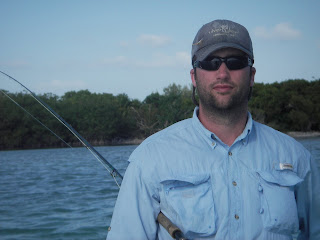 That's the look of on uber happy flats fisherman.

Sadly, the trip had to end. Back to shitty weather and real life. 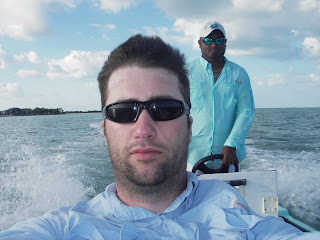 On Day 4, it was time to rip some lip...and the fish gods smiled on our whole group

Paired with my father and super guide Nestor, we found ourselves on the lagoon side of San Pedro with a score to settle with Mr. Macabe

As you can see, Nestor drives really fast. Also please note....the beard decided it had a mind of its own. Shit grows like weeds man, weeds

Right away, Nestor had us on fish. I threw the skunk off my back by 9am, and away we went....catching bones pretty much the whole day. There is NOTHING like a bone coming up following almost up to when your leader hits the guides and then slams your fly. 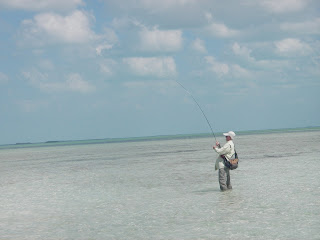 Highlights of day 4 include the picture above, when wading along a beautiful extended flat without Nestor (he went back to get the panga) I spotted a group of cruisers a hundred feet or so out from us. Slowly stalking, my dad and I got to about 60 feet. As it was his turn, I played marker, he laid out a beautiful cast with his crazy charlie and the fish engulfed the fly 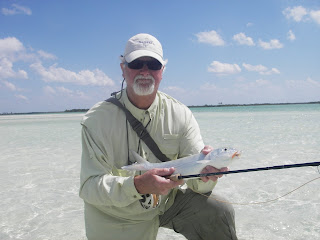 That was a special moment. Little did we know that much more was in store

We ended the day mostly wading to cruising schools of bones, and keeping our eye out for Permit. We had a killer double (photo's on OMR's camera) and I believe we touched about 10 fish each between my dad and I. All was right with the world 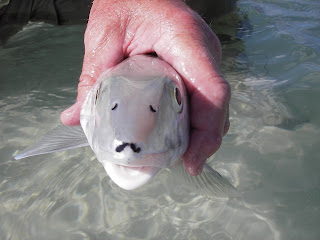 OMR Ver 2.0 (my uncle Larry) and I were paired together with superguide Tayo for day 5 of 6. We had the pleasure to fish with Tayo last year for 3 days. He straight works his ass off. Clouds came in overnight and we decided to stretch out the motor, head for Long Caye and try our luck at baby Tarpon and Snook. We had shots right away, but throwing a 10 weight and hitting a dime with a fly the size and shape of a chicken is difficult at best. But to throw out one of my favorite movie quotes. "If it was easy, it just be the way" 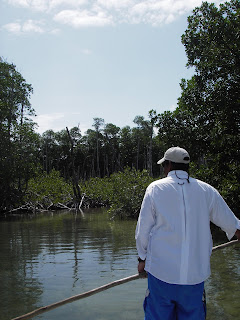 Tayo sneaking us back into the Mangroves of Long Key

3 times we threw at tarpon and 2 times at snook....and I find it's a hell of a lot like big game hunting. Watching, searching, waiting for the opportunities and all of a sudden...wham..there they are. Now, calm your nerves, work some line out, battle a cross wind and hit a spot under the mangrove overhang thats about 2 feet wide. RIIIIIIIIIGHT. Last year when we hooked them...its like corraling a fart. Good luck keeping them out of the mangroves, cause thats what they dive for when they need to

To end the day, Tayo took us to the lair of big bones, his secret spot as we made out way back from Long Caye. That's when lightening in a bottle happened 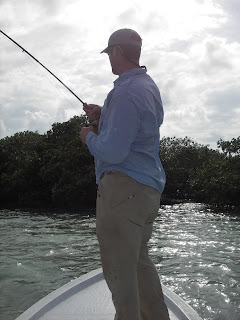 See the inlet to the right of my butt. So I bomb a cast into there, into what I think is a fresh mud. Strip, Strip, St--bammmm. Fish on, and with a strike that made me realize what a big fish this was. Down the mangrove line this sucker went, then doubling back into that very inlet where he came from. Once entered, he took a left and hung up on the shoots of the mangroves. All I could think was, "this fish is history" but somehow, I turned it around and back out he came, the third time he put me into my backing. When Tayo scooped it up for a photo, I was speechless.....by far the biggest bone I have ever caught, estimated at 6-7 lbs 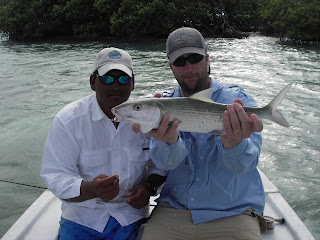 OMR Ver 2.0 ended the day with a big boy too, around 3-4 pounds that rode him hard and put hime to be smiling away 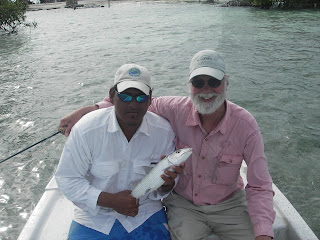 First off....news we were going with the Doctor of the Flats--Omar Areco

Day 6 will have to be an entire blog entry to itself. Everything came together right for one of the most epic days of fishing I have ever had

A little taste for you to wet you whistle with 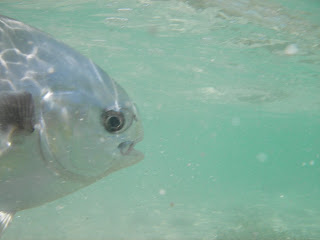 Posted by Millsy at 7:24 PM No comments: 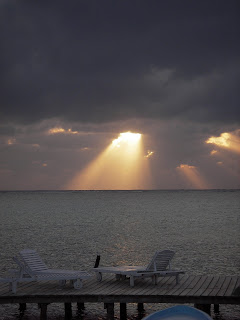 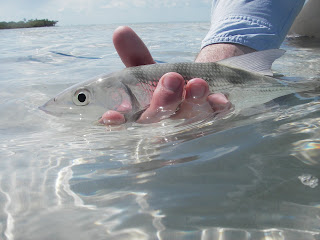 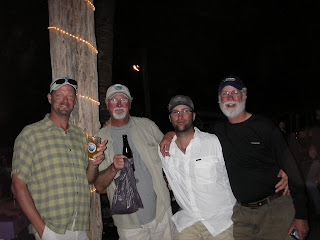 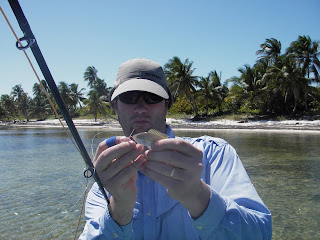 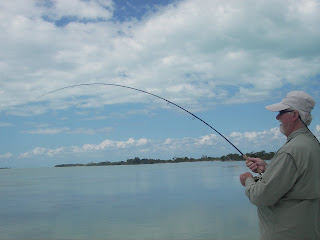 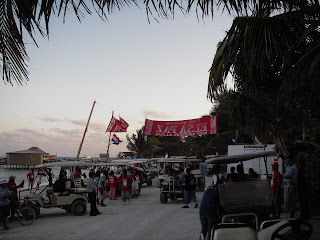 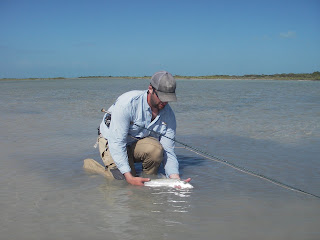