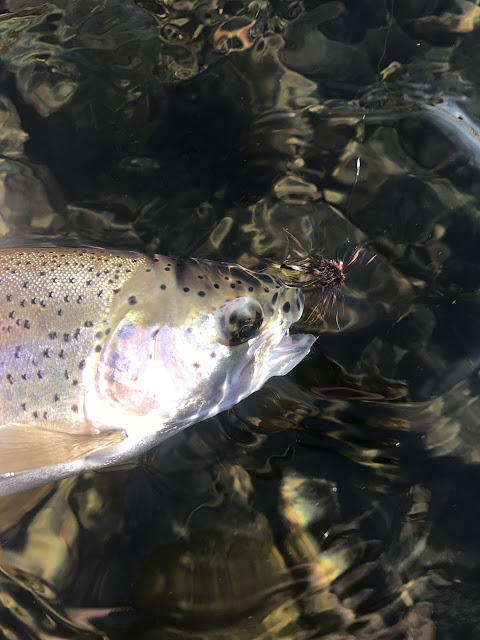 After the 435th consecutive cast without any positive response from the water, the grab was savage and woke me up like I was hit like a bolt of lightening

This particular river usually only has two things.  Big adult steelhead and small smolt in the 6-8 inch range.  The latter always give themselves up quickly and after your heart stops racing and you stop yelling F words....you can admire their aggressiveness and the hope for the future

The reports I was getting back from this particular fish on the line was a mixed bag and I've caught enough steelhead to not judge the size of the fish by the fight.   Last year's 38 inch hen on the dryline came right at me with the gusto of a smolt.  If i would have horsed it in as if it was a smolt, that fish would have been gone in 2 seconds.  The fish dug like a adult, pulled line but then would flop around like a juvenile.

This fish had me completely fooled.   18 inches of resident wildness.  In the 10 year's I've swung this river, I've never seen that before.  It goes to show you, there's a lot of mystery in the water.

The joy is finding it.
Posted by Millsy at 9:07 AM