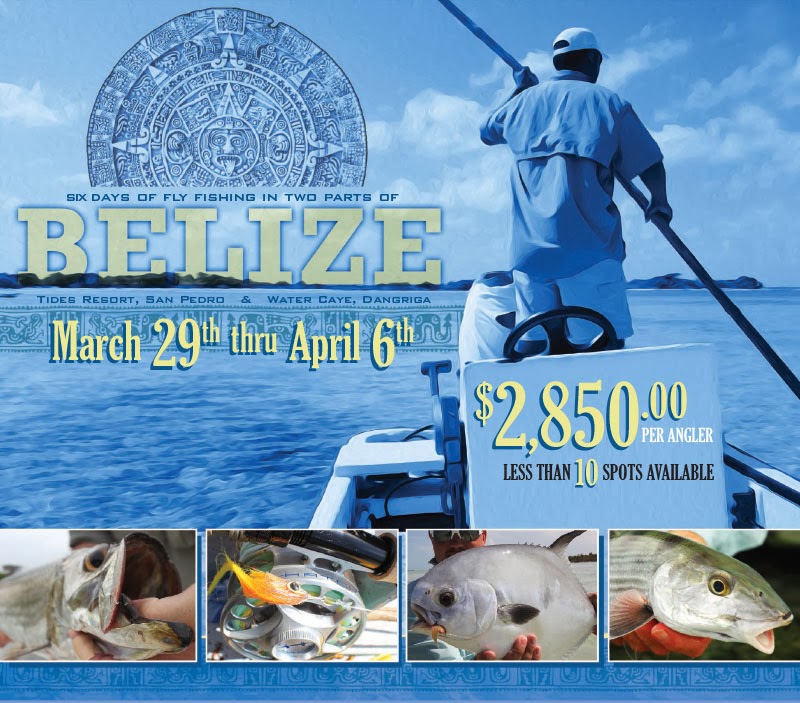 I've said it before.  There's only one type of fishing that would and could make me ever forget about Steelhead.

Saltwater flats fishing.  It's is, in a phrase.......(earmuffs kids) fucking amazing.

In the mythical time we call "Dinkhood" at my house, I got the opportunity to go to San Pedro, Belize in 2008 and 2009.  While I am sure it's grown up a bit in 4 years, the place is laid back, safe and unreal beautiful.  We had daily shots at school after school of bonefish, tarpon and the elusive permit.

Enter this opportunity from Denver and the crew at the Big R Fly Shop.  A split trip gives you a double dose of Belize.  Part of the trip in San Pedro in Ambergris Caye, the other half south to Dangriga.

I've stayed in the hotel they're going to in San Pedro....and while it's not four stars, it is clean, comfortable with air conditioned rooms and a hell of a oceanfront bar.  That may or may not be where you all meet up after a day on the flats and everyone shares stories of success and failure.  Also, San Pedro's great because you have shots at all big 3 flats species, and snook, jacks, barracuda and more.

The second locale is from I've read....."Permit Central"  Need I say more

The trip looks value priced and if you're dying to get the hell out of the cold and into a line burning permit run, I highly suggest you give the guys a the shop ring and book your trip.
Posted by Millsy at 10:08 PM