When Your Number Is Called... 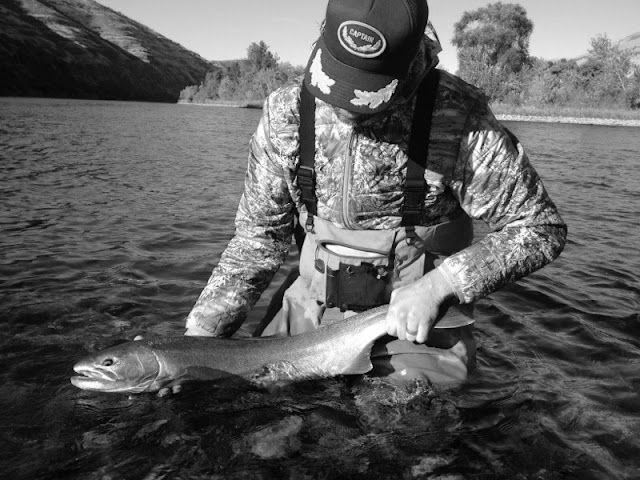 When the fish picked up the fly, it was a subtle tip tap....and thump.

Something was up, it wasnt doing what a steelhead normally does, that first initial surge wasnt there. It casually took it's time and took a pile of line with it out to the middle of the river and just sat there and wallowed.

If I was a betting man, I would have bet the house that this was a chinook.   I couldnt move it and when I did, it just went right back in the middle of the current and gave me the middle fin.

10 pound test maxima has it's limits, and the amount of pressure I put on the fish to check it's surges and runs was about there.  Still the thing was, it was a chinook.  Unintended bi-catch that while cool, it wasn't the intended quarry.

My fishing partners began to lament the time it was taking me to land this fish.  "Put the nuts to em" "Come on, get it did already"  We shared the same feeling that this was a salmon so no real pressure was felt.

Until it came in a little closer, rolled and the red strip of a massive B-Run buck indicated to us we had ourselves a full on level 10 situation.  A full on 2 foot jump confirmed that this was no salmon

When you have to that point the fish of your life on the line, things get a little...um, tight.    The talking got all type of serious and you could feel the pressure in the air.

Three times the buck came in to the shallows and appeared ready to be tailed, only to run out to the middle to sulk again.  I was ready for the hook to pull, as a fish like this doesnt give up the goods easily

Finally, head up on top sliding to the shore OMR grabbed it's tail and we all stood there speechless

It was a true giant of the species.

After a quick revival, we sent him on his way.  When your numbers called, enjoy it, and put it away in the memory bank to light up your days for years to come.
Posted by Millsy at 7:09 AM