The Generosity of New Friends... 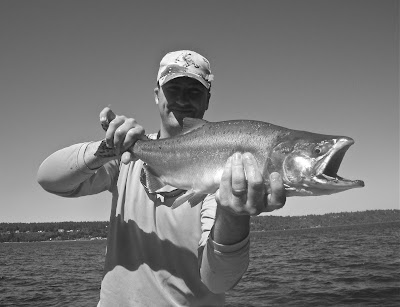 For a dude who only occasionally visits the salt, it's highly unlikely you run into salmon like this without a little help.

You have to rely on generosity of your friends.   Sometimes they're friends you've only met while connecting up to the increasingly small world of the fly fishing community.

Our world is small friends, brought increasingly smaller and tighter with social media, FB, Twitter and blogs like this.   At the same time, it can open the world up to experiences that weave you tighter within the fishing community and fishing as a part of your life.

And to this point, family brought my family across the state of Washington to Seattle for a little family event.  What might be happened at that very same time, the possible apex of the every odd year pink salmon run of an estimated 6-8 million fish to the Puget Sound.

A quick phone call a few weeks prior to Dylan Rose of Skate the Fly had our agenda set. As our day came closer, I learned that we would also be joined by photog and guide Dave McCoy of Emerald Water Anglers.   Anyone paying attention lately would know that these guys hit in the big leagues, and I felt honored to have them open up and bring a salt rookie along.

Oh yeah, I had never actually met these guys.  Just guest blog posts for Dylan and a bit of FB talking with Dave.  Sure Josh, come on down and we'll go find the fish.  Holy shit.


Lets just say I was so excited about fishing the next day, I probably slept about 3 hours.  I still woke up like I was shot out of a cannon. 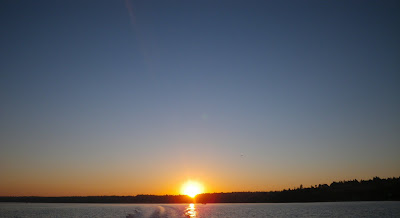 Morning came up on the South Puget Sound with high expectations and a boat launch that was nothing short of a goat show rodeo.   There's a level of energy and anxiety at a salmon season boat launch you just have to see for yourself to understand it fully. 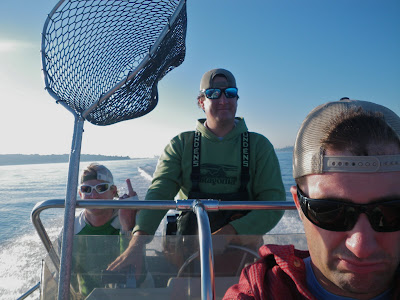 Storming out of the gate, we charged out to Dylan's honey holes to scan for nervous water and breaking pods of Pinks.  And for a long time, nothing happened.

It allowed us to get acquainted, to tell fish stories and find commonality.   Pretty funny on how similar we all are in the fly fishing community.  Funny stories on top of funny stories, places we've fished and you never would have believed it moments were exchanged.  I'd have to say we got along beautifully, but I dont think dude are supposed say things like this.   But what the hell, I was having a hell of a time even if we weren't finding the fish

Back and forth from spot to spot, we pulled into a bay we had been at earlier.  For no reason that seasonal patterns of these fish, it was a spot that had produced hansomely time after time and most importantly we weren't amongst a throng of people blasting the water with buzz bombs.  We had it to ourselves

And then it happened. 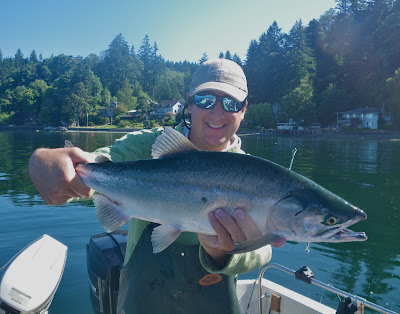 The fish found us.  A lot of them.

Dave got us first on the board, and we were soon into fish after fish as they encircled us with constant activity.  The fishless first 3 hours were all but a blip on the radar.  It was a blazing hot 2 hours of consistent hook ups and visual takes as the salmon chased and hammered our flies. 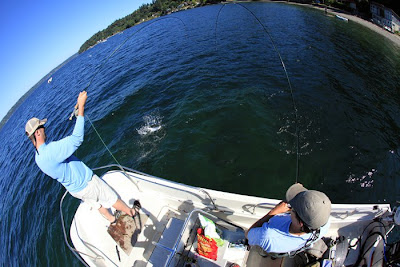 Most remarkably to me as I said before, we had the bay almost to ourselves.  One homeowner saw our activity and hoped into his zodiac to join the action.  He joined the craziness and at one point was hooked up at the same time as our double. 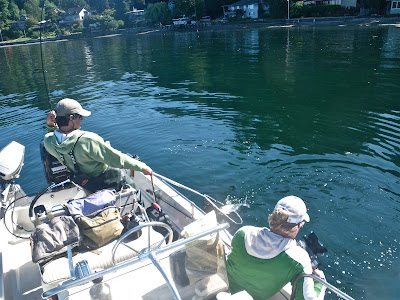 Putting it all together, it was amazing experience.  It was one of the most fun I've had fly fishing in a long time.  All of us on the boat were giggling like 5 year old girls when the action was rolling and it brought me back to why I love our sport.

I owe the day to Dylan and Dave, thanks so much for a hell of a day.  I hope to pay your openness and generosity forward in the near future.

Soon, Dylan will be moving to Ashland, OR to join the crew at Fly Water Travel and Dave will move into a busy schedule of guiding and shooting some amazing photos.  Want to see his work?  Pick up the most recently Fly Fishing Journal....about half the shots are his.

Until next time gentlemen.  Thanks for a hell of a day!
Posted by Millsy at 8:30 PM