Solitude On A Metro Steelhead River... 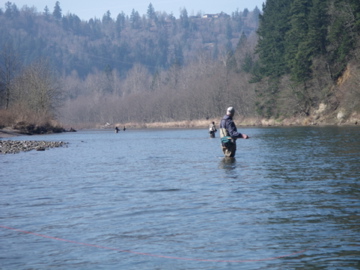 Just so you know, it doesn't exist.

I suppose I had my own mismanaged expectations on fishing a Oregon metro river on a Saturday on the nicest day of the year so far, but holy hell was it busy.  I cant fault folks for coming out and enjoying the resource.  Matter of fact, most were very nice and willing to share a run or two.  We had 4 guys ourselves and you're nuts if you think you're going to get a run to yourselves on a day like we had.

Did I mention 12 boats went through this run while we were fishing it?

To the jughead out there I had an altercation with, you're a swell feller.  Effectively cutting off 3 other guys in behind you working their way down the run by jumping into the gut of the run was a classy move.

Then your smoothness was showcased even more when I politely asked you to join us by following us down the run...in you know...classic stream etiquette, you erupted like a nutbag telling us that

Ahh, the joy and reverence of fishing on a Saturday around a couple million people. Give or take a few.
Posted by Millsy at 6:32 AM