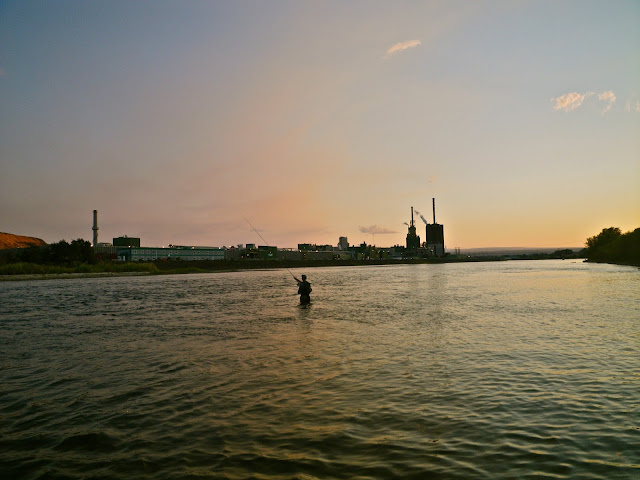 Here we are yet again, staring at dam counts and wishing this year's run of steelhead would hurry up and get here.

Sitting in the first run of the day, expectations were high.  "It only takes one" we jokingly repeated to each other knowing that really we were searching for needles in a gigantic haystack.

You can only stare at your line as it swings through the current until you start seeing and feeling things.

Really nothing's happening.  I am just wishing it was.

Fish for steelhead long enough and you'll understand quickly that you cant judge the fish by the size of a rise or pull on the bug.  Every single one is so varied that you have to just let it play out.

Back on the hunt, and the taps continue through mid swing.  In the last bit of arc I dropped my loop and waited the impossible 2 seconds before I lifted the rod.

The 10 inch smolt rocked out of the water just like it's much bigger cousins would do later in the year.    You have to laugh at and also respect a fish that can gives it their all, even though it's much, much, much smaller than you would have hoped.

6 times it jumped as it completed its full on juke of my emotions and 4 more times that exact scenario played out on our first trip of the year.

Thanks for the emotional roller coaster, I appreciate it.
Posted by Millsy at 7:00 AM