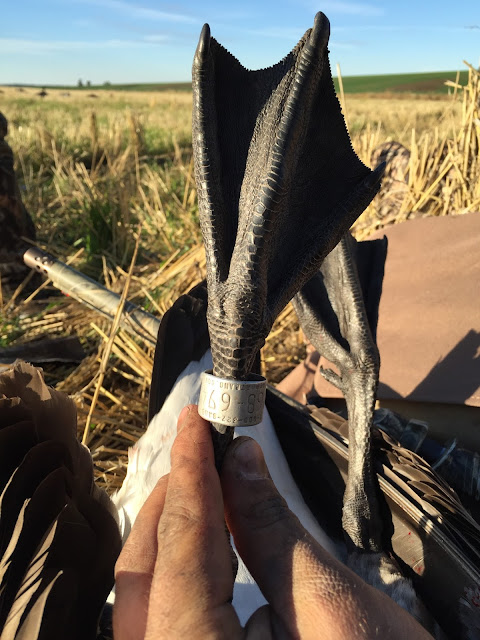 The 3 pack of geese circled our spread three times, progressively getting set up to cup their wings and descend into the open pocket we made specially for them

The amount of noise that geese make in the air, aside of their honks and clucks, is impressive, hightening the anticipation of our group leader with the call to raise up and unload.

Talk that day amongst the guys went the normal rounds.  Hunting strategy.  Old hunting stories, maybe a few stories about the fairer sex.  Most interesting to me, the holy grail of waterfowlers

I had no idea how rare they are in this area, at least for the hardcore goose hunters.

The guys I was with on this particular day fall into that category, living for the time when they get to yell "take em" and the blinds flip open.   They listen to YouTube clips of competition callers to get edge.   Nobody beats them in the morning to the field, and in 30 years of combined goose hunting nobody had a goose band on their collective lanyards.

The doors flung open and in moments later three geese hit the deck.  In the commotion of 6 guns doing what they do, it's really hard to say which hunter hit which target.

As I bent down to pick up the quarry,  there it was.

I yelled back to the guys and they all laughed.  We had been talking so much about bands that they thought I was pulling their legs.

Then they saw it, and the jaws dropped.

The guy who found the field and located the geese got the band.  He deserved it and all were happy that it would be on his lanyard.

Till the next time when "take em" is yelled.
Posted by Millsy at 3:32 PM