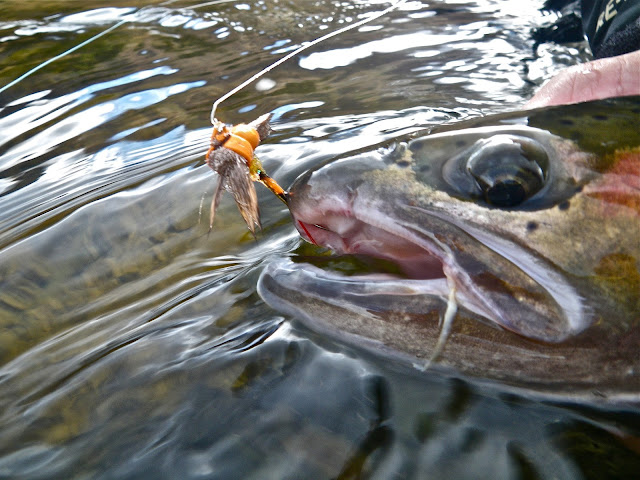 For the better half of three days on the river, it was nothing more than casting practice

And it was killing me.

I have never been so humbled by a river or a fish than I was on my last trip.   Cast after cast, run after run, day after day....nary a bump, tap or pull

Pouring salt on the wound, everyone around me was smashing.  I watched people outside of my party who couldnt cast 30 feet pile drive casts into the river and come up tight to a fish.    There were no answers inside my fly box and I continued to support my buddies by happily reeling up to assist in tailing of every fish that was hooked around me in the vain hope that it would put karma on my side.

I have always heard that these things happen to anyone who spends time on the banks of steelhead rivers.  Guys going November to the following September without a fish to the bank.  There are easier ways to catch these buggers than on the swing and a long dry spell will really test your convictions and morals.

All I could do was shake my head, down and few beers and smile.  And keep casting.

Ground down to a nub, laid bare and closing in on the third day of nothingness,  a bone was thrown my way.

A beautiful 10lb wide hen gave me all I could handle.  Coming to hand the fish closed the door on an ungodly skunking.   I couldnt have appreciated that fish any more if I tried.

So the moral of the story.  If you swing flies for steelhead, be prepared to be humbled.  It's going to happen, to everyone.

Just put your head down and keep casting.  It cant last forever.
Posted by Millsy at 2:17 PM