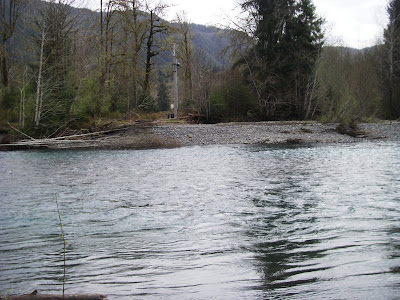 Looking across the river, just beyond the brush pile to where the gravel reappears....I hooked the biggest steelhead of my life.  As the title says, it was like trying to corral a fart.

Beyond that, the Hen kicked my ass.

The sequence of events still hang heavy in my brain from 5 days ago.  After two great guided days on the OP, we had a day to explore on our own, to find our own way and get back to catching steelhead unassisted.   Leaning a river like the Upper Hoh takes time,  so pulled off where we could, searched down the gravel bars where the water seemed likely and put our hope into each seam that looked right.

Towards middle afternoon, we chanced upon a run that looked a likely canidate to swing with the spray pole.  OMR posted up below me, and I took the head.  No more than 3 casts into this stepdown session than I hang up.  I give a little lift up and pull back and...Snnnnnnnnnnnnap Booooooom... 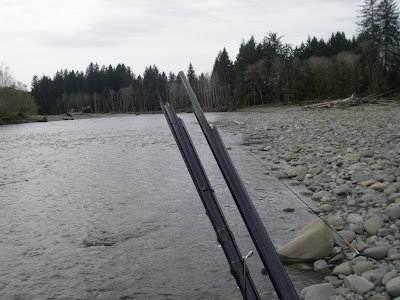 Dejected, I grabbed my nymph rod and pushed out to the far bank to drop my bugs into some ultra sexy h2o

Progressing down the bank, it happened.  I hooked Walter...or maybe I should say, Waltina

Twenty pounds of supercharged hen chrome took me on a ride that is on a permanent loop in my brain.  Into my backing in five seconds, followed by a series of boils and runs that had me catching my breath.  Going as fast as I could down the gravel bar to gain line back, I finally worked the fish to a stalemate.  10 minutes turned into 20, and I could BARELY move this fish.  I had as much pressure on the line as I thought the 12lb maxima could stand.

The whole time, OMR was dropping sage hints of wisdom like

"Dont let that fish get int that next set of rapids, you'll loose it"

Thanks.  Really.  Thanks a lot for that nugget.

We got to the point where I had lost enough ground, was about out of good landing water and I owed it to this steelhead to hurry up and make something happen.  As the leader knot hit the guides, my dad reached down to tail it...and realized...shit, he cant get his hand around the tail to restrain the fish

And just like that, one last surge and the hook poped out.  Gracefully...the hen drifted off.

I sank to my knees in the gravel and chucked my rod to the shallows.

Originally, I was heartbroken I didn't get a picture.  But really, that steelhead gave me more than enough to remember it by.

What a breathtaking exchange.
Posted by Millsy at 10:20 PM