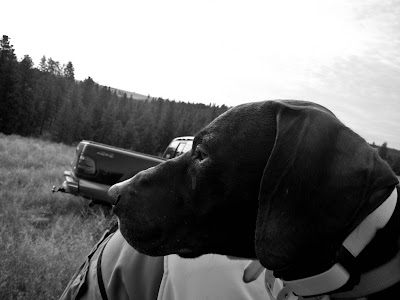 I learned a very long strong lesson in preparedness today.

Readers of this blog should recognize this little German Shorthair, Rex, owned by my bird chasing friend Marques.

With a few short days until my son is born, Marques and I got the dogs together to chase quail near our hometown which allowed me to get back just in case in under 20 minutes.

Nearing the end of a productive hunt which included a surprise rooster and 4 very nice covey's of quail, we had one more draw to hit up

No sooner than Murph Dog and Rex dove into the cut did the ground explode with the biggest covey of quail I have ever seen.  50-60 birds where spraying everywhere, interspersed with a big set of pheasants.  The dust settled and we set in to get the dogs on the downed birds.

Down at the bottom of the draw, I saw Rex and I knew instantly something was wrong from his body language.  Blood was covering his back leg, his head was down, and he wasnt coming to our calls.

Being the closest to him, I got to him as fast as I could.  Upon closer inspection it was plain as day, Rex was in a world of hurt.

The biggest gash I have ever seen on dog was wide open on his chest, from top of the breastbone to underneath  his front legs.  A solid 6-8 inches long and 2-3 inches wide and spewing blood.

Instantly I grabbed him up and sprinted up the draw back to Marquess and we then sprinted back to the truck.

Here's the lesson of the day that will effect what I bring with me bird hunting for the rest of my life.

That tape allowed us to firmly affix the makeshift tourniquet well enough to stop the bleeding until I drove at mach 9 to Spokane's emergency pet hospital.  Lets just say a ride that normally takes 25 took us 10 minutes.

Only after we handed Rex over to the kind vet did the situation hit us.  It happened so fast that we just reacted in the best manner we could at the fastest rate of speed that we could.  Amazing what happens when you just have to do it and GO.

Two hours later, the vet emerged from surgery and informed us that Rex was on the mend.  The details of the situation became more hairier with information from the vet.  As to how Rex was cut, we're pretty certain now that he impaled himself somehow in that last draw and the cut was dramatically worse and more serious that we originally thought.  More like 10-12 inches long by 4 inches wide and he just missed puncturing his breastbone by about 1/8th of an inch.  If that would of happened, this story probably would have ended in a much different manner.

Rex is now out of the game for the season, but he should recover well.  Thank god.

So what's the lesson here?  I will never hunt again with dogs without bringing a first aid kit specifically designed for our 4 legged friends.  I've always thought I should have one, now my first trip of the week will probably be to a local sporting goods store to pick up the biggest kit I can find.

You better believe it will have athletic tape, that's for sure

If you're hunting with dogs too, go find a first aid kit and make it part of the required uniform. It's best to have it and pray you never have to use it.  Our dogs hunt so hard for us,  crossing barbed wire fences, running through bogs, swimming through nasty swamps that we owe it to them to protect them as best as we can.
Posted by Millsy at 9:54 PM